Asphalt Not at Fault: How We...

Asphalt Not at Fault: How We Can Design Our Way to More Sustainable Roads and Lots 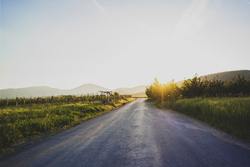 Concerns about sustainability and energy saving in the transportation industry is certainly not a new thing — in fact, it’s what many of us associate with carbon footprints and greenhouse gas emissions. While Elon Musk seems to be taking care of the vehicle side of the equation, the collateral manifestation of roads, highways and byways are usually left overlooked as part of the industry’s impact on the environment.

Not anymore. With a public investment of $190 billion per year on our roads and bridges and more than 4 million kilometers of existing paved road in the U.S., the discourse on transport sustainability is now focusing on the environmental impact of roads. Policymakers, NGOs and even manufacturers seem more committed to exploring energy-efficient options and sustainable methods of production. Researchers, in particular, are overturning the politics of the construction industry to enable policymakers to more easily choose in favor of sustainability.

The Road to Sustainability

What does sustainability look like when it comes to roads? The latest and most innovative solutions are in vogue, and often with good reason. Julie and Scott Brusaw have been determined to help mitigate the contributing effects of the transportation industry on the climate crisis. Approaching the issue as road and car together inspired by slot car track toys, they founded Solar Roadways with the idea to replace roads with solar cells and configure them to work with driverless cars.

Realizing the U.S. has more than 72,000 kilometers of paved road exposed to the sun, they began to explore how solar panels in the road could absorb energy and in turn produce three times more energy than the country would require. Groundbreaking, yes — but ready to replace every road needing repairs or construction, no.

That leaves us with another more realistic version of sustainability — improving the efficiency and recyclability of the current methods and materials involved in road production. Asphalt and concrete are the main materials used to make paved roads, streets, highways and byways in the U.S. and Europe, and looking at their application, production and maintenance, it becomes apparent that these can all be tweaked to have less of an impact on the Earth.

It should be noted that keeping these materials in good repair limits impact on both emissions caused by driving as well as replacement. Many municipalities, along with private and public businesses use a road reclaimer to strengthen deteriorated roads. It works by pulverizing the asphalt layer and mixing it with the underlying base and then adding asphalt emulsions and other binding agents.

Asphalt, a petroleum product, covers more than 90 percent of paved roads in the U.S., even though concrete is often used in the road structure underneath. Many public bodies of transportation prefer concrete due to its durability, as less repairs mean less energy for raw materials and downtime in the long term. However, with a ratio of 1:1 tonnage of carbon dioxide emissions to cement produced, it is hard to feel enthused by the production of either.

Still, the University of California’s Pavement Research Center suggests that arguing about the merits of these materials is irrelevant to environmental impact. Regardless of what holds pavement together, the primary ingredient is rock, which is a finite resource.

It is for this reason that recycling asphalt — Reclaimed Asphalt Pavement (RAP), or concrete —Recycled Concrete Aggregate (RCA) — is the actual task ahead. Through recycling asphalt or concrete, the energy taken up in the process of mining and transporting the primary rock material is saved.

While it remains difficult to recycle these materials on-site, there is the option to transport RCA or RAP on low-energy barges. Just under 73 million tons of asphalt were recycled eight years ago, whereas concrete is always touted as having 100 percent recyclable potential.

What is even more encouraging is that the production itself of these materials can be improved upon to have less impact on the environment. At the moment, standard asphalt needs heating to 150 degrees Celsius. However, with the addition of lubricants and other agents, the temperature can be reduced to as low as 90 degrees Celsius. Instead of hot-mix asphalt, you have exactly the same properties, but in the form of warm-mix asphalt. The FHWA has reported that the fuel required during this process can be reduced by 20 percent, and moreover workers are at less risk of inhaling toxic fumes.

Concrete production has also been overhauled by some researchers and manufacturers through using byproducts of the steel industry, such as fly ash or slag as a replacement binder instead of concrete.

While the transport industry is synonymous with non-sustainability, there are major changes happening. The mass of research and investment that has gone into how to improve our road needs has been successful by many accounts. Both RCA and RAP are growing in popularity and use, and more and more manufacturers of asphalt and concrete are motivated to become more energy-efficient in their production.