Preparing for a Lower Carbon Future

Preparing for a Lower Carbon Future

Series: JetBlue – Inspiring Humanity in the Air and on the Ground 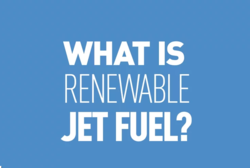 Since the Wright brothers, planes have been running on fossil fuel – that’s 100 years of using the same energy source. Just as the term “fossil” implies, the externalities from this form of fuel means there is need for rethinking. Investments in renewable energy are needed for a more sustainable future, especially in the aviation industry.

As an airline, it’s no secret that our largest impact is emissions. Earlier this week, JetBlue made a big step towards our future by announcing one of the largest renewable jet fuel purchase agreements in U.S. aviation history. JetBlue has entered into a 10-year partnership with SG Preston, a bioenergy company, to buy renewable jet fuel produced from biological resources, like plant material, which can rapidly be replenished.  This marks the largest, long-term, commitment globally by any airline for a jet fuel based on fatty acids, a way to extract carbon to burn for energy.

As an investment in our future, we plan to purchase more than 33 million gallons of blended renewable jet fuel per year for at least 10 years. The fuel will consist of part renewable jet fuel and part traditional Jet-A fuel. The total amount of renewable jet fuel we purchase will equal approximately 20% of our annual fuel consumption at New York’s John F. Kennedy International Airport (JFK).

The FAA has long approved renewable jet fuel as safe for use while key partners including Embraer, Airbus, GE, and Pratt & Whitney have tested and certified its use. More than 2,200 commercial, revenue flights by 22 airlines have already been flown on different types of renewable jet fuel.

Last year, as part of our long-term strategy to reduce our emissions we began actively exploring biofuel options.  As the only airline to sign the White House’s 2015 American Business Act on Climate Pledge, we vowed our support for an international climate agreement working towards a low-carbon, sustainable future. We’re already making strides with technological advancements like sharklets which improve aerodynamics and cut fuel burn and emissions.  Renewable jet fuel is another proactive step in the right direction.

Like all modern economic activity, flying will still free CO2 from the ground and put it in the air. Renewable jet fuel cannot eliminate our emissions. It is one big step towards a lower-carbon future.