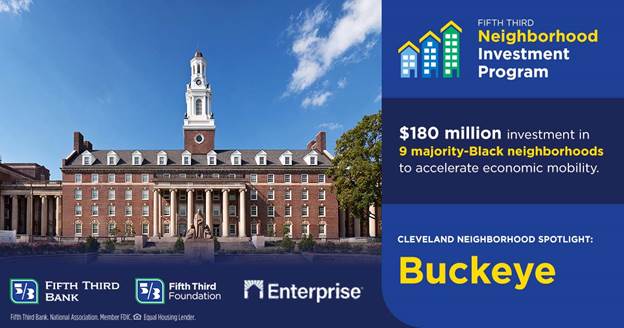 “This opportunity allows Fifth Third to invest in a unique way by taking a thoughtfully structured approach to solve real-world systemic issues,” said Joe DiRocco, regional president, Fifth Third Bank, Northern Ohio. “This program goes beyond infusing capital into neighborhoods. We are working to make a significant impact by targeting investments in specific areas, collaborating with communities and their leading organizations and driving change through tangible place-based methods.”

Fifth Third is collaborating on the initiative with Enterprise Community Partners, a national nonprofit that exists to make a good home possible for the millions of families without one. Together, they managed a criteria-based, invitation-only application process to select nine majority-Black neighborhoods that have seen a sustained period of disinvestment. The Buckeye neighborhood in Cleveland was one of the locations selected. Enterprise will provide technical assistance to support each neighborhood in developing and implementing a plan tailored to the unique challenges it faces. Enterprise will then assist with assessing the plan’s effectiveness at improving the economic well-being of residents and small locally owned businesses. Successful outcomes will include investments in small businesses, homeownership and workforce development that promote economic stability and growth.

“We are committed to providing strategic insight that will help establish an upward trajectory for communities that have historically had limited investment opportunities,” said Dana Capers, community and economic development manager, Fifth Third Bank, Northern Ohio. “This is more than giving Bank dollars and programs to communities in need. Through the Neighborhood Investment Program, we’ll connect comprehensive assistance to build relationships within these communities. This will develop a foundation of equity to help eliminate racial disparities and level the playing field.”

Fifth Third intends to commit up to $20 million in lending, investments, and philanthropic support, including grants from the Fifth Third Foundation to the Buckeye neighborhood. The investment will include $2 million in grants and $18 million in affordable financing from housing to small business loans.

The Buckeye neighborhood was invited to apply for the program based on its ability to meet specific criteria, including partnering with the neighborhood’s Black residents, existing civic infrastructure in the neighborhood and its capability to manage equitable investment and wealth-building opportunities. Buckeye is part of Mayor Frank Jackson’s Neighborhood Transformation Initiative, and it recently received a Choice Neighborhoods Implementation Grant from the United States Department of Housing and Urban Development. The program’s funds will support the economic mobility of Black low- to moderate-income residents in the Buckeye neighborhood and cultivate investments and resources from additional stakeholders. The plan includes home repair and rehabilitation and targets the area south of Buckeye Road.

Tania Menesse, CEO & President, Cleveland Neighborhood Progress, said “There’s been so much work done to get to this point. We’re so appreciative of Fifth Third and Enterprise Community Partners recognizing the momentum and our ability to take this work in the southern part of the neighborhood, which we’ve all been anxious to embark on. This investment gives us the chance to do that.”

Cleveland Neighborhood Progress will manage the effort in partnership with Burten, Bell, Carr Development, CHN Housing Partners and other vital neighborhood stakeholders. It calls for:

Also planned is a pilot program to help residents purchase and rehabilitate single-family and two-story homes, helping to manage the appraisal gap in the neighborhood. New owners will be able to live in one unit while providing a quality affordable home to another family. The additional income will help new homeowners thrive, build wealth and prevent displacement of Black residents. They’ll also have access to landlord and small business training over the first 18 months.

The Neighborhood Investment Program is part of Fifth Third’s $2.8 billion commitment that will provide $2.2 billion in lending, $500 million in investments, $60 million in financial accessibility and $40 million in philanthropy from the Fifth Third Foundation as part of Fifth Third’s Accelerating Racial Equality, Equity and Inclusion initiative. The commitment is focused on four strategic pillars that directly impact customers and communities with targeted outcomes enabling the Bank to track progress and measure success in the areas of strategic investments, access to capital, financial inclusion and education, and social justice and advocacy. This program also aligns with Enterprise’s new strategic plan and three central goals: to increase housing supply, advance racial equity and build resilience and upward mobility.