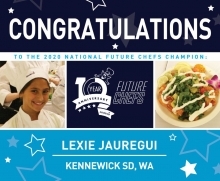 GAITHERSBURG, Md., Apr. 15 /CSRwire/ - In a cooking challenge designed to engage school students in creating and enjoying healthier eating habits, Lexie Jauregui, a fourth grader from Kennewick, Washington, was selected as the national winner of the 10th annual 2020 Sodexo Future Chefs Challenge. The theme of this year’s competition was “Your Favorite Lunch Meal - Reimagined”. Jauregui, with her “Nacho School Lunch”, provided a healthy and sustainable twist to a school lunchroom favorite as a plant-based alternative featuring Beyond Meat as an ingredient.

“While the COVID-19 pandemic forced us to cancel our public events around the Sodexo Future Chefs Challenge this year, the passion, creativity, and resilience demonstrated by the students was as inspiring as ever,” explained Stephen Dunmore, CEO Schools, Sodexo North America. “Lexie’s winning recipe speaks to the trends we’re seeing across the culinary world – with her healthier, meat-alternative spin on a comfort food.”

Celebrating its 10th year, the Sodexo Future Chefs Challenge encourages healthier eating habits by actively involving students in good nutrition. Students participating in the program represent more than 1,400 Sodexo-served elementary schools, in 256 school districts from 31 states. In a modified format, a panel of judges reviewed the recipes and evaluated them based on originality, healthy attributes, ease of preparation, kid-friendliness and plate presentation.

Jauregui won the challenge in her home school district, then beat competing recipes among the Top 40 entries from around the U.S. before narrowly edging out four other students in the regional round to secure the title as national winner. In addition to receiving $1,000 worth of prizes, Jauregui’s “Nacho School Lunch” recipe will be added to school lunch menus across the United States.

The other regional winners were:

Watch Lexie Jauregui receive the news that she was the Future Chefs national winner. Join the Sodexo Future Chefs social media conversation by using the hashtag #SDXFutureChefs in related Tweets and posts.