These factors and many more are driving risk for utilities 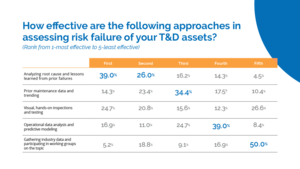 Mar. 25 /CSRwire/ - With great power comes great responsibility, meaning it falls to utilities to ensure that their transmission  and  distribution  (T&D)  assets can — and will — perform at the appropriate reliability and safety levels while continuing to meet regulatory and environmental standards.

So, what are utilities doing to manage risk while still providing reliable service amid the surge in distributed energy resources (DER) and the constant threat of significant weather-related disruptions in an age of record-setting events? In many ways, that comes down to a simple premise: Regulators, customer satisfaction and shifting expectations  are driving a lot of risk for  utilities.

State government oversight of electric utilities is enjoying increasing sway, pressing power providers to modernize at a time when sources of renewable energy are casting a widening shadow among a citizenry demanding cleaner, greener ways to keep their lights on. States are imposing new mandates on utilities to accommodate that sustainability trend. Regulators and governmental agencies are making certain that utility defenses account for the potential threat of cyberattacks and physical security breaches meant to disrupt the grid.

Even as infrastructure continues to age and renewable energy sources grab a bigger footprint, regulatory matters ultimately drive a lot of the decision-making among utilities. Respondents  to Black & Veatch’s annual survey of utility companies, regardless of their size, pointed to regulation as the chief risk their organization must manage, followed at a considerable distance by issues that often can compel regulatory action: customer expectations, environmental compliance, technological change and natural events related to such things as storms or climate change.

As more utility customers migrate toward DER, regulators are flexing their oversight muscles to ease  that  transition.  For  example,  in  early 2018 the Massachusetts Department of Public Utilities   authorized   the   commonwealth’s utilities to invest $220 million in grid modernization efforts over the ensuing three years to upgrade their distribution systems to enhance efficiency, ostensibly ensuring that ratepayers get the most reliable service at the lowest possible  cost.

Given that, maybe it’s not surprising that nearly three-quarters of respondents cited improving reliability as the top challenge with their electric distribution system. Nearly half also pointed to asset management and improving resilience.

Overall, utilities believe they’re keeping pace in their understanding of enterprise-level risks, with more than 90 percent of grading themselves as anywhere from average to industry-leading on that front, while just 9 percent grade themselves as below or well below average. The overall showing appears commendable, considering the unprecedented levels of change in technology and consumer influences — and regulatory responses to both taking place in the industry.

Throw in the fact that two-thirds of respondents considering their T&D system’s reliability and safety to be in the top 25 percent, two questions arise: What’s the metric by which the utilities are measuring themselves, and are they dangerously overconfident?

When it comes to adopting or developing a risk- based management system for their T&D assets, utilities  — largely  the  biggest  ones  — appear  to be ahead of the curve. Nearly half of respondents (47 percent) already have such an effort running, while one of every five respondents say they’re implementing one. Ten percent say they’re drafting plans.

The potential upshot is tremendous, considering that such self-evaluations may help utilities make the case to regulators in rate cases for capital improvements. But because such programs vary in detail and quality, it’s unclear how well they use the system’s data to fully inform operators about their assets.

When it comes to ways to assess the veracity of their T&D assets, utilities prize letting history be their guide. Two-thirds of respondents say that analyzing the root causes and lessons learned from prior failures was either the first or second top pick. Visual, hands-on inspections and testing took first or runner-up among 45 percent  of  survey-takers. That  may be the most effective approach — and the most challenging to scale up to the number of assets because utilities simply don’t have enough employees to optimally carry it out.