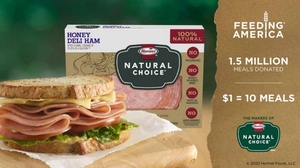 This year-long donation program will help ensure that food-insecure people and communities throughout the United States will have access to nutritious food.

The donation is an extension of the brand’s Good Feeds Us All campaign, which was created in 2019 to inspire people to choose good whether it’s in the food they eat or the actions they take.

“We believe everyone should have access to nutritious food,” said Beth Fehrenbacher, senior brand manager for the Hormel® Natural Choice® brand. “We are proud to team up with Feeding America to help feed the one in nine people in the United States who struggle with hunger.”

“Big brands have the power to impact hunger insecurity in our nation and Hormel Foods is taking accountability for their influence in a positive and effective way,” said Elizabeth Marquardt, interim managing director, new partnerships at Feeding America. “With this contribution we will be able to provide 1.5 million meals to people in need. We are thrilled to be the facilitators of Hormel Foods’ mission to make meaningful actions of good happen beyond the food aisle.”

Feeding America is a nationwide network of 200 local food banks that feed more than 46 million people each year through food pantries, soup kitchens, shelters and other community-based agencies.

According to Feeding America, there are 37,227,000 people in the United States struggling with hunger, and of them more than 11 million are children and nearly 5.5 million are seniors.

Hormel Foods has been a Feeding America partner since the 1970s. For additional information about the company’s hunger-relief efforts, please visit https://csr.hormelfoods.com/communities/.