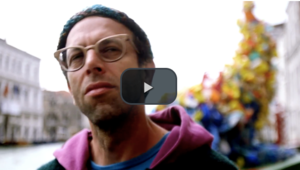 Above: Click here to watch video. Below: FPT Industrial supported artist Christian Holstad who developed a work of art from plastic waste recovered from the sea for the Venice Biennale. 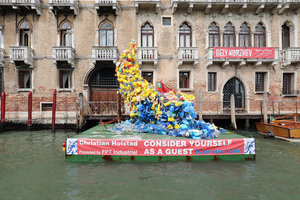 Feb. 04 /CSRwire/ - Our first location is the pretty seaside town of San Benedetto del Tronto located on Italy’s Adriatic coast, not only a popular tourist destination but a busy commercial port with a strong fishing heritage. It is here that FPT Industrial, the global powertrain brand of CNH Industrial N.V. (NYSE:CNHI / MI:CNHI), launched its “Fishing for Plastic” initiative in collaboration with “Clean Sea LIFE”, a European project whose aim is to raise awareness about marine waste and to empower local communities to become part of the solution. The results were quite astonishing with some three tons of plastic “fished” from the sea in a mere month. Following a successful debut, the initiative has now been rolled out in South America.

From the sea to the foothills of Alps - our next stop is a reforestation project in the Basse di Stura area to the north of Turin where FPT Industrial is working with the local community to plant some 1,000 trees transforming it into an all-around sustainable area. It is estimated that this project will help reduce carbon dioxide by some ten tons annually.

The final setting for the video is the iconic city of Venice and its world famous Biennale International Art Exhibition. FPT Industrial sponsored American artist Christian Holstad whose installation was made entirely from plastic waste and was inspired by the firsthand testimonies of the fisherman of San Benedetto del Tronto. The video follows Christian as he produces and delivers the artwork; its striking form truly encapsulates the importance of such an initiative.

The diverse locations, communities and projects highlight what can be achieved when committed groups of people come together.

WATCH IT NOW AT: cnhindustrial.com/artenvironmentsustainability_en.