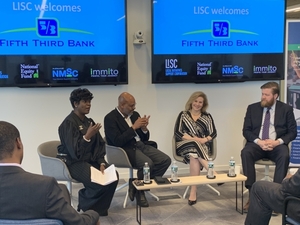 NEW YORK and CHICAGO, Jan. 29 /CSRwire/ - Fifth Third Bank, National Association, announced today that it would invest $100 million in projects that support community development through four Opportunity Zone fund partners. The first two partners were announced at a 9:00 AM press conference at the national headquarters of Local Initiatives Support Corporation (LISC). The National Equity Fund, an affiliate of LISC, and Raymond James will be the first two partners to identify and structure investments meeting the Bank’s criteria. The remaining two partners will be announced in Chicago on Monday, Jan. 27.

The funds will be used to develop projects in low-income urban and rural communities across the Bank’s 10-state footprint. This investment represents one of the largest made by an institution with a social impact investment strategy in Opportunity Zones.

“We are committed to forging impactful partnerships that deliver community revitalization,” said Greg D. Carmichael, chairman, president & CEO, Fifth Third Bank. “We are proud to use this innovative approach to ensure our capital will serve the communities that are most in need.”

“This long-term investment in Opportunity Zones is a call to action for communities to partner with institutions that are aligned with making a social investment,” said Byna Elliott, chief enterprise responsibility officer. “Building affordable and middle-income housing, increasing capital for small businesses and workforce development programs benefits all of our community stakeholders.”

Fifth Third is committing $25 million to the NEF Fifth Third Opportunity Zone Fund I LLC and $25 million to the Raymond James Opportunity Zone Fund IV. The remaining $50 million will be committed to two other partners. The funds will be used in three key investment categories: affordable housing; workforce housing and other community priorities for multifamily development; and certain non-residential or mixed-use real estate serving a particular community need, as well as projects that contribute to local job and business growth.

“We are excited to help Fifth Third break new ground in Opportunity Zones with a strategy that prioritizes local impact along with a reasonable financial return,” said Maurice A. Jones, LISC president and CEO. “Not only does this capital help LISC’s affiliate NEF fuel housing for working families, but it also features a novel approach that will represent the best intent of the Opportunity Zone incentive.”

Fifth Third Opportunity Zone investment projects that are currently being considered include the redevelopment of affordable and workforce housing with a minimum of 51% of the units targeted to families with income at or below 80% of the area median income; forming a partnership with a housing authority organization to bring a grocery store to a food desert; investment in neighborhoods that are part of larger strategic growth initiatives in various cities; community centers for public housing residents and creating a commercial kitchen for use by small business entrepreneurs.

The first projects from the Fifth Third Opportunity Zone investments should be announced by June 30, 2020.

About Fifth Third Bancorp
Fifth Third Bancorp is a diversified financial services company headquartered in Cincinnati, Ohio, and the indirect parent company of Fifth Third Bank, National Association, a federally chartered institution. As of December 31, 2019, Fifth Third had $169 billion in assets and operated 1,149 full-service banking centers and 2,481 ATMs with Fifth Third branding in Ohio, Kentucky, Indiana, Michigan, Illinois, Florida, Tennessee, West Virginia, Georgia and North Carolina. In total, Fifth Third provides its customers with access to approximately 53,000 fee-free ATMs across the United States. Fifth Third operates four main businesses: Commercial Banking, Branch Banking, Consumer Lending and Wealth & Asset Management. Fifth Third is among the largest money managers in the Midwest and, as of December 31, 2019, had $413 billion in assets under care, of which it managed $49 billion for individuals, corporations and not-for-profit organizations through its Trust and Registered Investment Advisory businesses. Investor information and press releases can be viewed at www.53.com. Fifth Third’s common stock is traded on the Nasdaq® Global Select Market under the symbol “FITB.” Fifth Third Bank was established in 1858. Deposit and Credit products are offered by Fifth Third Bank, National Association. Member FDIC.

About LISC and NEF
With residents and partners, LISC forges resilient and inclusive communities of opportunity across America—great places to live, work, visit, do business and raise families. Since 1979, LISC has invested more than $20 billion to build or rehab 400,500 affordable homes and apartments and develop 66.8 million square feet of retail, community and educational space. Founded in 1987 by LISC, NEF is a leading investor in affordable housing currently managing more than $15 billion of investments in more than 110,000 units for affordable housing across the country. To learn more, visit www.lisc.org and www.nefinc.org.