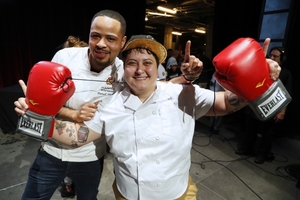 In a nod to DC’s mixology scene, guests voted in the People’s Choice Mixology Competition, sponsored by Beam Suntory. Six mixologists poured specialty cocktails before Sophie Szych of Quill was named the 2019 People’s Choice winner for her creation, “Knobbing for Apples” prepared with Knob Creek Rye.

Capital Food Fight raised over $815,000 for DC Central Kitchen to continue its work fighting hunger differently in the nation’s capital, including generous donations made during the event and a special matching challenge from Stand Together Foundation.

DC Central Kitchen earns more than half of its annual budget through social enterprise ventures that are powered and led by graduates of the organization’s acclaimed Culinary Job Training program for adults who have faced barriers to employment. The rest of DC Central Kitchen’s budget is secured through charitable fundraising efforts including the Capital Food Fight.

“Smithfield Foods is proud to once again support DC Central Kitchen’s Capital Food Fight, a wonderful opportunity to come together with likeminded partners to fight hunger in our nation’s capital,” said Keira Lombardo, executive vice president of corporate affairs and compliance for Smithfield Foods, and president of the Smithfield Foundation, the company’s philanthropic arm. “It’s encouraging to see so many in the D.C. community stand up for our neighbors in need to truly make a difference for those struggling with food insecurity and the effects of poverty.”

DC Central Kitchen (DCCK) is an iconic nonprofit and social enterprise that combats hunger and poverty through job training and job creation. The organization provides hands-on culinary job training for individuals facing high barriers to employment while creating living wage jobs and bringing nutritious, dignified food where it is most needed. DCCK’s social ventures include serving scratch-cooked farm-to-school meals in DC schools, delivering fresh, affordable produce to corner stores in neighborhoods without supermarkets, and operating a fast-casual cafe. DCCK has been featured in national media including The Washington Post, The Atlantic, National Geographic, PBS NewsHour, and more. To learn more, visit dccentralkitchen.org or follow @dccentralkitchen on Instagram.

About Stand Together Foundation

All people have unique gifts and talents – with unlimited potential to offer the world.  Stand Together Foundation partners with the nation’s top-performing non-profits to help them deepen and grow their impact through innovative solutions to break barriers for people in poverty so that they can realize their unlimited potential. Stand Together Foundation partnered with DC Central Kitchen as they are alleviating the cycle of generation poverty as well as related and compounding issues for families across Washington DC that include food deserts, violence, addiction and mass incarceration – the partnership began in February of 2019 through the Stand Together Foundation Catalyst Program.

Stand Together Foundation is proud to sponsor the Capital Food Fight and support our shared mission to break barriers for people in poverty so that they can realize their potential.

About The Anthem
Just blocks from the National Mall, The Anthem is the new $60 million music venue at The Wharf on Southwest Washington, D.C.’s waterfront. The Anthem has a flexible capacity of anywhere from 2,500 to a maximum of 6,000—with many seated and general admission configurations. With full arena production and rigging capabilities, internationally touring artists such as Foo Fighters, Bob Dylan, The Killers, and Lorde are making The Anthem their stop while on upcoming arena tours. The Anthem has a few rows in the balconies that are Super Excellent™ Seats. Each seat is uniquely angled to face the stage at the exact perfect position. Owned by I.M.P., the company that owns the 9:30 Club and operates Merriweather Post Pavilion and the Lincoln Theatre, The Anthem is the first venue of its size in D.C. specifically built from the ground up for music and fills an important void in D.C.’s music scene. www.theanthemdc.com