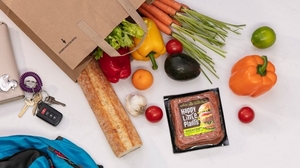 “Hormel Foods has one of the most admired brand portfolios in the industry, led by our legacy of industry-leading innovation,” said Jim Splinter, group vice president of corporate strategy at Hormel Foods. ”We are continuing to build an organization that has the agility and adaptability to create products to align with today’s dynamic marketplace.”

The Happy Little Plants™ brand is part of the company’s plant-based and blended protein innovation efforts, which began in 2014 with the launch of the Hormel® Fuse™ burger in the company’s foodservice business. Today, retail and foodservice product offerings have expanded to include additional plant-based pizza topping items produced at its Burke Corporation subsidiary and the Applegate® Blend Burger™, a product that blends organic meat with organic mushrooms.

Happy Little Plants™ products launched this week and have distribution in select retail outlets, with further expansion planned in the coming months. Numerous retailers and foodservice operators have expressed interest based on the exceptional taste, versatility, and simple ingredient statement. Its flagship product is a ground plant-based protein alternative containing 20 grams of non-GMO soy protein, is only 180 calories, with no preservatives, no cholesterol and is gluten-free.

Splinter added, “We understand consumers across a spectrum of lifestyles are adopting more flexible attitudes and behaviors when thinking about food, especially given the wide variety of products available in the marketplace. We intend to focus on all the ways plants can help consumers find alternatives in their food routines.”

For more information on the Happy Little Plants™ brand, including where to purchase, please visit www.happylittleplants.com