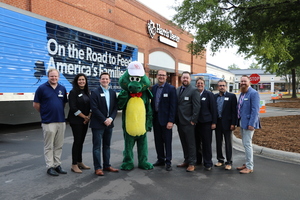 “Food insecurity remains a serious problem in central and eastern North Carolina, even as we continue to expand our services to feed nearly 600,000 individuals struggling with food access,” said Carter Crain, Director of Food Partnerships for the Food Bank. “This donation from Smithfield and Harris Teeter gives us the ability to provide wholesome meals to those in need, and these companies are true long-term partners in the fight against hunger.”

The donation, equivalent to more than 160,000 servings of protein, will support the Food Bank’s efforts to alleviate hunger across its 34-county service area. This is the 39th large-scale protein donation made by Smithfield to food banks across the country during its 2019 Helping Hungry Homes® tour. Since the program’s inception in 2008, Smithfield has provided more than 130 million servings of protein to food bank, disaster relief efforts, and community outreach programs nationwide.

“With more than 10,000 employees throughout North Carolina, Smithfield Foods is proud to call this state home,” said Jonathan Toms, associate manager of charitable initiatives for Smithfield Foods. “As we work to address the needs of neighbors in our local communities, we are pleased to partner with organizations like Harris Teeter, to come together and serve wholesome meals to those who need it most.”

The Food Bank of Central & Eastern North Carolina is a nonprofit organization that has provided food for people at risk of hunger in 34 counties in central and eastern North Carolina for more than 35 years. The Food Bank serves a network of more than 800 partner agencies such as soup kitchens, food pantries, shelters, and programs for children and adults through warehouses in Durham, Greenville, New Bern, Raleigh, the Sandhills (Southern Pines), and Wilmington. In fiscal year 2018-2019, the Food Bank distributed nearly 83 million pounds of food (over half of which was perishable) and non-food essentials through these agencies. Sadly, hunger remains a serious problem in central and eastern North Carolina. In these counties, almost 600,000 people struggle to access nutritious and adequate amounts of food necessary for an active and healthy life. foodbankcenc.org.