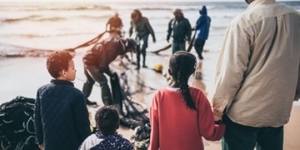 What if San Francisco was suddenly empty? Or New York City? Or both? Imagine over 9 million people fleeing their homes, families and friends, schools, and jobs—leaving two of the United States’ most populous cities nearly empty. Our world would look different—we would notice and want to know what’s going on. We would want to help.

The reality is that all around the world, people are fleeing from violence, persecution, or disaster in search of safety. We often don’t feel these effects because it isn’t happening in our own backyard. It’s in countries like Afghanistan, Iraq, and most notably Syria, where more than 11 million people have been displaced from their homes. According to the UN Refugee Agency (UNHCR), there’s over 68.5 million people forcibly displaced around the world.

That’s why on World Refugee Day, we shed light on this reality for millions of people globally.