“I believe so strongly, especially in our industry, that personnel equals policy.” 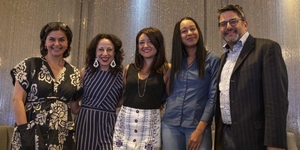 Journalists Maria Hinojosa and Julio Ricardo Varela recorded an episode of their In The Thick podcast at Viacom’s Times Square headquarters last week, moderating a panel that explored how underrepresentation in the production and executive ranks feeds a skewed media portrait.

The panel, co-hosted by Hispanic employee resource groups from Viacom (Somos) and HBO (Alianza), included employees from both companies.

Insights from the panelists gave human perspective to the need for more diversity within the television industry over the last several years. Amid the Time’s Up and #MeToo movements, companies have been forced to address a legacy of gender and racial discrimination in front of and behind the camera to succeed in appealing to increasingly diverse viewers. As the most recent Diversity in Hollywood Report from UCLA asserts, “today’s diverse audiences, the evidence shows, prefer film and television content populated with characters to whom they can relate and whose stories drive the narrative.”