Now’s the Time to Ideate, Inspire, and Innovate for a Circular Future 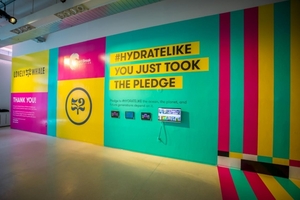 Imagine dumping one garbage truck filled with plastic material into the ocean every minute. Now imagine two trucks per minute. Now four. Visualizing this makes my stomach turn, yet each year at least 8 million tonnes (about 1 truck load/minute) of plastics enter our ocean. It’s estimated that if no action is taken, by 2030 that number will double. By 2050, it will quadruple.

Plastic pollution is a relatively new challenge, yet its accelerated growth is staggering. The world has produced as much plastic since 2000 as in all the preceding years combined—and a third of it is leaked into nature. Once plastic enters the ocean, it’s incredibly difficult to remove. Plastic materials break down to create microplastics, which are then ingested by marine life and ultimately by humans. In fact, a new report commissioned by WWF estimates that, on average, people consume the equivalent weight of one plastic credit card per week.

Now here’s the positive news: plastic pollution is a problem that we, as people and businesses, have the power to solve. Plastic plays an essential role in our society and economy, and it’s up to us to manage it responsibly so it retains its value and remains in circulation.