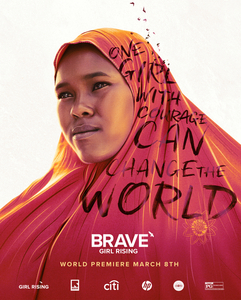 NEW YORK, Mar. 08 /CSRwire/ - Girl Rising, the nonprofit behind the global campaign for girls’ education and empowerment, debuts their newest film Brave Girl Rising online now at YouTube and https://girlrising.org.  The 20-minute film marks its debut on International Women’s Day, today Friday, March 8.  Written by a refugee, performed by refugees, and made in collaboration with refugees in one of the largest camps in the world, Brave Girl Rising is about how hope, love, and friendship can propel us beyond even the bleakest of circumstances.

This evening the West Hollywood City Council will honor the film in a special event hosted by Freida Pinto with performances by Warsan Shire, the first Young Poet Laureate of London (2014) and the poet behind Beyoncé’s Lemonade as well as American-Indian singer Gingger Shankar.  The social change nonprofit Amplifier (the group that created the iconic We the People campaign) will roll out a national public art campaign to inspire action in support of refugee girls through special events, public art displays and free art giveaways at select locations across the country, and free high-resolution downloads of original artwork. The artist Ashley Lukashevsky created artwork inspired by the film, and the poster will be distributed at the event tonight and shared on social.

Brave Girl Rising, made in collaboration with the International Rescue Committee (IRC), tells the story of Nasro, a 17-year-old girl whose courageous drive to continue her education is inspired by the magical dreams of her mother and the sisterhood of her friends. Nasro arrived at Dadaab, one of the world’s largest refugee camps, when she was only 7 years old and is supported by IRC’s Women’s Protection and Empowerment program. The film is narrated by Tessa Thompson (Creed 2, Westworld, Thor, Men in Black: International), and Golden Globe winner David Oyelowo (Selma, Gringo, Queen of Katwe). Poet Warsan Shire incorporates elements of magic realism and moving poetry in the screenplay, which she wrote, based on hours of conversation with Nasro. The story weaves together true events from Nasro’s life and dreams, along with Shire’s own experiences as a refugee.

“We want to get people talking about the reality for refugee girls all over the globe, the barriers they face in securing basic human rights and the truly transformative power of education for girls living as refugees”, said Christina Lowery, CEO of Girl Rising. “We believe films like ours can turn bystanders into activists and we have seen first-hand the results of people who become engaged in the issue and are inspired to act.”

Nicole Behnam, IRC’s Senior Director of Violence Protection and Response said, “Adolescent girls are amongst the most marginalized populations on earth, and efforts to support and empower them are lifesaving, not optional. This film brings much-needed awareness to the challenges faced by women and girls in crisis and show the importance of prioritizing their safety, education and wellbeing.”

The global debut will be backed by a robust online advocacy toolkit and curriculum, made available in 7 subtitled languages and will become part of Girl Rising's local programs in India, Pakistan, Kenya, Nigeria, Guatemala, and the US. Brave Girl Rising also marks the expansion of Citi’s partnership with Girl Rising, serving as the Founding Partner of this project, the first in a new round of Girl Rising films and campaigns.

The premiere also marks the worldwide debut of the complete Girl Rising 10-part series on YouTube. Brave Girl Rising continues the storytelling that began with the original film Girl Rising; an innovative feature film about the power of girl’s education that featured the voices of Meryl Streep, Cate Blanchett, Kerry Washington, and more. Girl Rising, named the #1 Most Dynamic Social Initiative (Forbes), “a social media marketing phenomenon” (The Daily Beast), and awarded the highest-to-date social impact score of 98/100 by Participant Media. They went on to launch the #62MillionGirls campaign with Michelle Obama, and in 2016 produced with Meryl Streep “We Will Rise,” a film about Michelle Obama’s mission to educate girls; now the most watched CNN Film of all time.

Girl Rising is a non-profit organization that creates powerful stories to change the way the world values girls -- stories about girls who face daunting barriers to their independence with determination and courage. These stories are the foundation of GR’s educational tools and curricula used in collaboration with local partners throughout the world -- tools that build confidence and agency in girls and change attitudes and social norms within their communities. Globally, GR continues to fuel and strengthen social movements to inform, engage and inspire the public to take action for girls and gender equality.

The International Rescue Committee responds to the world’s worst humanitarian crises, helping to restore health, safety, education, economic well-being, and power to people devastated by conflict and disaster. Founded in 1933 at the call of Albert Einstein, the IRC is at work in over 40 countries and 28 offices across the U.S. helping people to survive, reclaim control of their future, and strengthen their communities. Learn more at www.rescue.org and follow the IRC on Twitter & Facebook. The IRC helps people whose lives and livelihoods are shattered by conflict and disaster to survive, recover, and gain control of their future.

Citi, the leading global bank, has approximately 200 million customer accounts and does business in more than 160 countries and jurisdictions. Citi provides consumers, corporations, governments and institutions with a broad range of financial products and services, including consumer banking and credit, corporate and investment banking, securities brokerage, transaction services, and wealth management.

HP Inc. creates technology that makes life better for everyone, everywhere. Through our portfolio of printers, PCs, mobile devices, solutions, and services, we engineer experiences that amaze. More information about HP Inc. is available at http://www.hp.com.

Amplifier is a design lab that builds art and media experiments to amplify the most important movements of our time. We design and distribute art that engages people in the creation of a more just, inclusive and sustainable future. Since 2015, we've worked with over 300 renowned artists, distributed over a million pieces of art and sent free artwork to hundreds of thousands of students across the united states and beyond. We are a 501c3 non-profit organization and are the folks behind the iconic We The People campaign and the Here Our Voice exhibition.