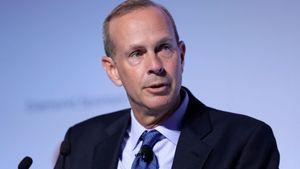 Chevron CEO Michael Wirth (above) has tried to demonize human rights advocate Steven Donziger, while Ecuadorians such as Angel Toala (below) have died from exposures to the company's toxic waste. Chevron abandoned roughly 1,000 toxic waste pits in Ecuador 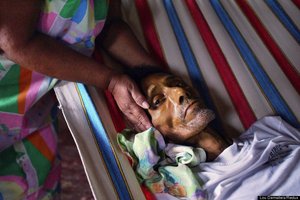 The latest move by Chevron comes at a time when Wirth has been subject to withering criticism by numerous institutional shareholders and environmental groups over his mishandling of the Ecuador judgment, which has been confirmed by four courts in the South American nation that found the company deliberately dumped billions of gallons of life-threatening oil waste into the rainforest. Chevron also has spent an estimated $3 billion to hire at least 2,000 lawyers to attack the judgment but still faces an enforcement action against company assets in Canada, where that country’s Supreme Court recently backed the Ecuadorian communities in a critical decision.

Chevron officials and its corporate defense lawyers at the Gibson Dunn law firm in the U.S. also were hit with an embarrassing criminal referral letterto the Department of Justice over allegations that they bribed an admittedly corrupt witness as part of an illegal scheme to evade paying the Ecuador judgment. Wirth authorized millions in Chevron payments to the corrupt witness, who later admitted he perjured himself repeatedly under oath in U.S. federal court after being coached for a staggering 53 days by a Gibson Dunn team. (For more on Gibson Dunn’s history of fraud and ethical violations, see here.)

Donziger characterized the latest Chevron move to try to penetrate his electronic devices an attempt “to retaliate against me personally and to distract attention from the fact Wirth has lost a major environmental case and put his own shareholders at risk by wasting billions of dollars in legal fees.”

“This is about using SLAPP-style intimidation to silence legitimate advocacy by a company embarrassed that it was held accountable by Indigenous peoples,” said Donziger, who pointed out that 17 appellate judges in Ecuador and 12 in Canada have affirmed all or parts of the Ecuador trial court judgment.

The latest Chevron move also comes after the company admitted it was running a “demonization” campaign against Donziger and froze his personal bank accounts and harassed several of his family members and supporters with document requests and demands for sworn depositions. Donziger has asked that Judge Lewis A. Kaplan, who is overseeing Chevron’s request, hold him in voluntary civil contempt to allow an immediate appeal should the company be allowed to proceed with its plan.

“Chevron's attempt to wholesale seize my electronic devices and review years of protected correspondence with my clients as well as my intimate and private communications with friends and family is totally out of bounds and clearly violates the Constitution,” said Donziger. “One would think that the CEO running America’s third-largest company would have something better to do than authorize lawyers to attack a human rights advocate who works out of his apartment. It shows the degree of Chevron’s pettiness. Wirth is embarrassed because our team of human rights lawyers has helped formerly voiceless peoples shine a huge spotlight on the company’s environmental crimes."

In 2009, a high-level Chevron official conceded the company’s defense strategy in the case was to “demonize Donziger” and to tie up the case in Ecuador (where Chevron insisted the trial be held) with procedural gamesmanship. At one point, Chevron lawyers filed 39 duplicative motions in 50 minutes and threatened the Ecuador trial judge with jail if he did not rule in favor of the company. Chevron also tried to pressure Ecuador’s President to quash the case in exchange for a $750 million aid package it hoped to offer via the U.S. State Department.

Four layers of courts in Ecuador have affirmed the pollution judgment against Chevron, including the country’s Constitutional Court in an 8-0 decision issued last July.  All found that Chevron (when operating as Texaco from 1964 to 1992) deliberately dumped billions of gallons of benzene-laced oil waste into the Amazon, creating a humanitarian catastrophe that has led to thousands of deaths according to several independent health evaluations. Chevron took out an estimated $25 billion in profits over the course of its operations in Ecuador and has reaped billions more by delaying a final resolution of the litigation, said Donziger. The company reported profits of $4 billion in the third quarter of 2018.

Despite numerous adverse court rulings, Chevron continues to claim it was the victim of fraud in Ecuador based on the testimony of its paid Ecuadorian witness, Alberto Guerra. Guerra claimed Donziger approved the offering of a bribe to the Ecuador trial judge, but he later admitted he lied and a forensic report proved his claim that the judgment was “ghostwritten” was false. (See here.) Donziger, a Harvard Law graduate who never had a single client complaint in 25 years of law practice, categorically denied the allegations and says they were a Chevron attempt to frame him with the taint of criminality as a way to evade paying the judgment.

The trial brought by Chevron before Kaplan, held without a jury in 2013, was widely considered to have been rigged to favor the company. The judge refused to consider any of the environmental evidence against Chevron. He also refused to seat a jury of impartial fact finders, allowed Chevron to violate attorney-client privilege by taking possession of Donziger’s case file, and repeatedly made inappropriate comments from the bench in favor of Chevron. He also refused to hear Donziger’s counter-suit against Chevron (see here) which laid out facts showing the company had engaged in a racketeering scheme targeting his clients and their counsel.

Kaplan himself has been criticized widely – including by Greenpeace co-founder Rex Weyler in a detailed article -- for his pro-Chevron rulings in the case and for allowing the company to make millions of dollars of secret payments to a court official who repeatedly favored the company. For details of Chevron’s fraud in its targeting of Donziger and the Ecuadorian Indigenous peoples and farmer communities, see here.

Donziger recently filed a petition with the Inter-American Commission On Human Rights challenging the failure of the New York judiciary to protect his due process rights. He has been backed by Global Witness and other prominent human rights groups that have expressed “serious concern” about his mistreatment by Kaplan. Greenpeace co-founder Weyler called him a “hero of the environmental movement” while prominent U.S. trial lawyer Rick Friedman has likened his mistreatment by U.S. judicial authorities to what one often sees in authoritarian nations.