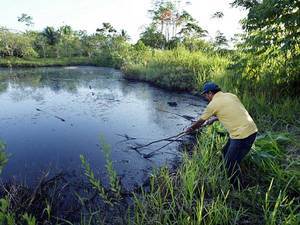 One of the estimated 1,000 unlined waste pits that Chevron built in the Amazon when it operated in Ecuador from 1964 to 1992. Steven Donziger helped his clients win a court judgment requiring that these pits be remediated.

NEW YORK, Dec. 05 /CSRwire/ - Prominent New York corporate accountability advocate Steven Donziger this week won the right to open his bar disciplinary hearing to the public after international human rights groups expressed concern about what they call a “systematic denial of due process” to the former attorney who helped win a historic $12 billion pollution judgment against Chevron.

In what was hailed as a victory for the First Amendment, a New York appellate court this week granted Donziger’s request to open his bar hearing after staff attorneys at the New York attorney grievance committee (which regulates attorney licensing) tried to close the proceeding and deny admission to the press and to human rights groups.

Donziger said he believes the bar staff lawyers last July inappropriately suspended his law license without a hearing based on contested findings of a federal judge that have been rejected by 17 appellate judges in Ecuador, where the judgment against Chevron issued. The decision by federal judge Lewis A. Kaplan – who found the Ecuador judgment had been obtained by fraud -- is based largely on testimony from an admittedly corrupt Ecuadorian witness paid $2 million by Chevron who later admitting lying repeatedly in Kaplan’s court.

“The New York bar for almost two years has denied my right to present evidence to challenge Judge Kaplan's problematic findings while Chevron has used those same findings to subject me to vicious attacks designed to taint my reputation,” said Donziger, who has not received a single client complaint in 25 years of law practice. “The bar staff attorneys, obviously under pressure, are unfortunately doing Chevron’s dirty work designed to retaliate against me for having helped to hold the company accountable for massive and even deadly harm caused to Indigenous peoples in the Amazon.”

(Here is background on the extraordinary lengths taken by the bar lawyers to deny Donziger a hearing, including seeking a last-minute stay after a neutral bar referee found he could present evidence challenging the Kaplan findings.)

Martin Garbus, a noted First Amendment scholar from New York who is representing Donziger in the bar proceeding, celebrated the decision to open the hearing. “It is shocking to me that the New York bar staff lawyers would even try to keep the proceeding closed and deny Steven the right to present evidence when he clearly has a constitutional right to try to clear his name in a public setting,” said Garbus.

“The New York bar’s treatment of Steven has been utterly reprehensible and it needs to change,” he added.

The bar staff attorneys handling Donziger’s case, Jorge Dopico and Naomi Goldstein, refused to grant Donziger a hearing or even allow him an interview despite his repeated offers to cooperate. (This letter is Donziger’s initial response to the bar’s inquiry.) Dopico and Goldstein repeatedly have tried to block Donziger from providing evidence to show the Kaplan findings are erroneous and that the company's paid witness was prepared for 53 consecutive days by Chevron lawyers at the Gibson Dunn firm. The witness, Alberto Guerra, later admitted under oath in a separate arbitration proceeding to having perjured himself repeatedly in Kaplan's court.

The underlying environmental judgment against Chevron has been affirmed by four layers of courts in Ecuador, including in an 8-0 decision by the country's Constitutional Court issued last July. Canada’s Supreme Court also handed down a unanimous decision backing the right of the Ecuadorian communities to try to enforce their judgment against company assets in that country.

Years after the Kaplan trial ended, it is believed that Chevron continues to pay Guerra a salary 20 times higher than his former salary in Ecuador. The company also has admitted to having moved Guerra and his entire extended family to the U.S., helped them obtain political asylum, provided them a housing stipend and health care, and paid all of Guerra's income taxes.

Garbus and Charles Nesson, a well-known Harvard Law School professor, filed an amicus brief in support of Donziger’s right to a hearing where he can contest Kaplan’s findings. Donziger also has won the support of many prominent attorneys, including Garbus and Richard Friedman, the former President of the prestigious Inner Circle of Advocates. (See this article on how legal community is “shocked” by Donziger’s case.)

Global Witness, a well-respected human rights group in London, has written the New York bar grievance committee expressing "serious concern" about the lack of due process in the Donziger proceeding. (See here.) Simon Taylor, one of the founders of Global Witness, has said he will continue to monitor the NY bar’s treatment of Donziger and that the group will have a representative attend any hearing. “What is so bizarre about this situation is that it feels like those in other countries where we try to help dissidents who are targeted for political reasons,” said Taylor. “It is just shocking to us that this is taking place in New York.”

Other organizations, including Rainforest Action Network and Amazon Watch, also have written letters to the bar expressing concern over its treatment of Donziger.

Donziger said the evidence that Chevron’s lawyers at the Gibson Dunn firm orchestrated Guerra’s false testimony and tried to frame him with criminal wrongdoing has been transmitted to the U.S. Department of Justice for a criminal investigation.

"The bottom line in my view is that Judge Kaplan's findings are either erroneous or so decontextualized from Ecuadorian law that they are useless as a basis to impose attorney discipline," Donziger said.  “If given the chance, I am confident that any neutral arbiter who considers the full body of evidence will agree with me.”

If allowed a fact hearing, Donziger said he plans to call as witnesses several prominent attorneys who can testify about the many flaws in Chevron’s case before Judge Kaplan; Ecuadorian lawyers and law experts; and Indigenous leaders from Ecuador’s Amazon who observed his conduct over a period of years and who can testify as to his character.

Donziger, who graduated in the same Harvard Law School class as President Barack Obama and Supreme Court Justice Neil Gorsuch, has traveled to Ecuador more than 250 times since the inception of the case against Chevron in 1993. Chevron has used at least 60 law firms and 2,000 lawyers to fight the Ecuadorians.