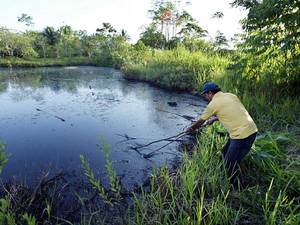 One of the estimated 1,000 unlined waste pits that Chevron built in the Amazon when it operated in Ecuador from 1964 to 1992. Steven Donziger helped his clients win a court judgment requiring that these pits be remediated.

Earlier this week, New York bar staff attorneys Jorge Dopico and Naomi Goldstein obtained an order from a New York appellate judge staying Donziger’s two-day fact hearing which had been scheduled to begin Dec. 4 in Manhattan. Donziger, whose law license was suspended in July without a hearing, was going to present the evidence of Chevron’s fraud after a court-appointed referee issued a hugely important ruling last month allowing the attorney to challenge the 2014 pro-Chevron findings of federal judge Lewis A. Kaplan in a civil racketeering case.

The stay will allow a New York court time to determine whether it will overturn the bar referee’s procedural decision favoring Donziger in the middle of an ongoing attorney disciplinary proceeding – something that is virtually unprecedented in the history of New York, according to several attorneys in the state. “It appears to our team that the bar staff lawyers in New York are nervous about letting Steven expose the truth about Chevron’s fraud, which might embarrass Judge Kaplan and other judges to whom the staff attorneys must answer,” said Patricio Salazar, the Ecuadorian lawyer against Chevron and a colleague of Donziger.

The referee in the case, John Horan, had examined the Kaplan RICO trial and concluded there might be support for Donziger’s long-held contention he did not get a fair trial.  He also questioned whether Kaplan violated Donziger’s constitutional right to due process by denying him a jury of impartial fact finders even though he was effectively facing criminal charges, albeit in the context of a civil case with a relaxed evidentiary standard.

Long known as a pro-business judge, Kaplan effectively “created a criminal indictment” and tried Donziger for conspiracy, said Horan. “It is doubtful that is an indictment in the same terms had been brought by the United States Attorney, (Donziger) would have elected to have a trial by a single judge and would have waived his right to a trial by jury,” Horan wrote.

Donziger has categorically challenged each of the Kaplan findings, saying they are based primarily on false or decontextualized evidence and Kaplan’s stubborn refusal to consider the voluminous scientific evidence of Chevron’s environmental contamination in Ecuador. The environmental judgment against Chevron in Ecuador is based on 105 technical evidentiary reports and has been affirmed by four layers of courts in the country, including last July in an 8-0 decision by the country’s Constitutional Court. Seventeen judges in Ecuador have affirmed the judgment against Chevron and rejected the Kaplan findings. Kaplan refused to read any of the evidentiary reports from Ecuador.

Donziger maintains the Kaplan ruling relied to a huge degree on false testimony from an admittedly corrupt Ecuadorian witness paid $2 million by the company and coached for 53 days by its lawyers. Donziger said the Chevron payments amount to witness bribery and were designed to elicit a false story to taint him with criminal wrongdoing. The paid Chevron witness, Alberto Guerra, later admitted under oath that he had lied repeatedly before Kaplan.

Chevron in 2011 had come to New York courts to sue Donziger, a Harvard Law graduate who works out of his apartment, under a civil “racketeering” statute intended to target the Mafia. Chevron sought a U.S.-record $60 billion in damages to retaliate for Donziger’s role in helping a team of Ecuadorian lawyers obtain the judgment. Kaplan then denied Donziger a jury and refused to hear critical evidence, among other problems that Donziger outlined in this rebuttal document.

Chevron dropped all damages claims against Donziger on the eve of trail to avoid a jury, but Kaplan nevertheless awarded Chevron an $813,000 judgment against Donziger for “court costs” which normally are no more than $10,000. Donziger has been unable to pay the judgment, which prompted Chevron to freeze his bank accounts three months ago.

Donziger said his treatment by the New York bar “reflects so poorly on the New York judiciary” that it is attracting attention from human rights groups around the world. Already, three such organizations have expressed concern about they call the “systematic denial of due process” in the Donziger case – concern normally expressed on behalf of dissidents in other countries who are prosecuted for political reasons. The organizations are London-based Global Witness and U.S.-based Amazon Watch and Rainforest Action Network.

Donziger called the entire experience “perplexing” and he again called on the bar to give him a normal fact hearing and to drop its opposition to Horan’s decision.

“Mr. Dopico and his staff are fighting to deny me a hearing, fighting to deny me the right to present fact evidence, and fighting to deny me the right to have the public attend if a hearing were to occur,” said Donziger. “Mr. Dopico is also interfering with my right to counsel by sitting on his hands while the applications of my attorneys to represent me have been pending for several weeks before the very judges who oversee his office. After I offered to cooperate with an inquiry, his office never even allowed me to sit for an interview. These delays and the brazen denial of due process are simply unacceptable.

“When I describe these facts to an objective observer, they usually assume I am talking about a legal proceeding in China or North Korea and not the state of New York,” he added. “This is becoming an international embarrassment to our state and frankly I grieve for the death of due process in attorney disciplinary proceedings if my case continues along this path.”

Donziger added: “Many lawyers in New York have told me they find it shocking that the very people who purport to determine licensing issues are letting their office be used as an instrument of Chevron’s demonization strategy against my vulnerable Ecuadorian clients and their lawyers Chevron’s strategy is to drive lawyers off the case rather than litigate on the merits. The company has been very clear about this in its public statements.”

Relying on testimony from Chevron’s paid witness Guerra, Kaplan found in 2014 that Donziger approved the promise of a future bribe to the trial judge in Ecuador. After Guerra later recanted key parts of his testimony, a forensic report emerged after Kaplan’s trial that also raised profound questions about Guerra’s credibility and strongly suggested Chevron falsified evidence. Chevron and some of its lawyers at the Gibson Dunn firm are now subject to a criminal referral letter to the U.S. Department of Justice stemming in part from the allegations of witness bribery.

While Kaplan refused to reconsider his findings in light of the new evidence, six of his close colleagues on the federal trial bench in New York wrote a private letter to Dopico in late 2016 demanding his office sanction Donziger without a hearing based on Kaplan’s disputed decision. (Donziger’s response to that initial letter is here.) The letter from Kaplan’s colleagues was sent at a time Donziger was publicly critical of the judge and when the environmental case was advancing in Canada, where the Ecuadorians are trying to enforce their judgment.

Chevron has a long history of bad faith and forum shopping in the case, the first to result in a large environmental judgment obtained by Amazon Indigenous peoples and farmer communities.

After the Ecuadorians won the judgment, a high-level Chevron official threatened them with a “lifetime of litigation” if they persisted. Another Chevron official wrote an email saying the company’s long-term defense strategy was to “demonize Donziger” to distract attention from the company's wrongdoing. Chevron lawyers, including Randy Mastro and Andrea Neumann of the Gibson Dunn firm, have openly called for Donziger’s disbarment at industry legal conferences.

Dopico claims that the only hearing Donziger is entitled to is a sanctions hearing even though New York law expressly states that any lawyer suspended is entitled to a post-suspension hearing. The U.S. Supreme Court also has ruled that a post-suspension hearing is required when a person is deprived of a property interest (such as a law license) on an emergency basis without a chance to present evidence.