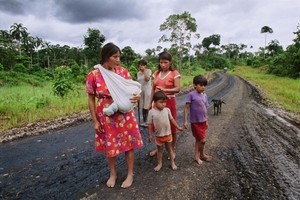 NEW YORK, Oct. 09 /CSRwire/ - With Canada’s Supreme Court backing Ecuadorian Indigenous peoples against Chevron, some of the world's leading environmental groups have thrown their support behind leading U.S. human rights attorney Steven Donziger as the oil giant continues its unprecedented retaliation campaign targeting those who held it accountable for the dumping of billions of gallons of toxic oil waste in the Amazon.

Donziger is widely considered the target of the most well-financed and vicious corporate retaliation campaign in history, with Chevron spending at least $2 billion on 60 law firms to try to undermine him with an avowed “demonization” campaign after he helped Ecuadorian Indigenous peoples and farmer communities win a $9.5 billion pollution judgment in Ecuador. To retaliate, Chevron used fraudulent evidence from a paid witness to obtain a non-monetary “fraud” judgment from a sole U.S. trial judge against Donziger.

That decision, from Judge Lewis A. Kaplan, has been rejected or ignored by 17 appellate judges in Ecuador and 12 in Canada, including by the entire Supreme Courts of both countries. Chevron had fought to have the environmental case heard in Ecuador, where the company was convicted in 2011 of dumping billions of gallons of cancer-causing oil waste that poisoned huge areas of the Amazon and decimated Indigenous groups and farmer communities with a public health catastrophe. (Here is a summary of the evidence against Chevron.)

In the last two weeks, London-based Global Witness put out an alert in support of Donziger, as did U.S.-based Amazon Watch and Rainforest Action Network. (See here and here.) Chevron and its lawyers also were hit with a criminal referral letter to the U.S. Department of Justice related to the company’s witness bribery and fraud used to try to frame Donziger. Other key developments in favor of Donziger include:

**Global Witness, one of the word’s leading human rights groups, sent a letter to the New York judiciary expressing “serious concern" over violations of Donziger’s due process rights after staff attorneys at the New York bar suspended his law license in July without a hearing based on the false testimony from a paid Chevron witness. The witness, Alberto Guerra, later admitted he lied on the stand about a supposed "bribe" of the Ecuador trial judge after Chevron lawyers coached him for 53 days.

**Amazon Watch, Rainforest Action Network, Stand.Earth (formerly Forest Ethics), and Greenpeace USA have pledged support for request for a thematic hearing before the Inter-American Commission On Human Rights challenging the use by Chevron and other corporations of a vague civil “racketeering” statute to attack lawyers and activists who seek to hold companies accountable for human rights violations. The IAHCR has broad discretion to protect the rights of private citizens.

**John Phillips, a prominent Canadian human rights lawyer who advises the Ecuadorian communities, also backed Donziger as he challenges the decision of the NY bar to designate him an “immediate threat to the public order” based on the disputed Kaplan findings. That decision by the NY bar led to expressions of “shock” in the U.S. legal community given that Kaplan’s decision has been rejected by 17 appellate judges in Ecuador. Phillips noted that Canada’s Supreme Court, in ruling unanimously in favor of the Ecuadorians in their judgment enforcement action, also ignored Kaplan’s erroneous findings when Chevron tried to insert them in the case.

“I am shocked and dismayed by the decision of the New York bar to withdraw Steven Donziger’s license,” said Phillips. “In my view, the process falls short of due process, and falls well short of what we expect from the New York bar. As for the merits, it seems the decision was based largely on Judge Kaplan’s judgment. In my view Judge Kaplan had questionable jurisdiction, and his findings were  based on an incomplete record that included significant evidence that Mr. Donziger was prohibited from presenting.

“One day, I believe we will look back on these events regarding Steven Donziger and his clients in Ecuador as being a major miscarriage of justice and an inexcusable failure to allow vulnerable indigenous people to obtain redress for the destruction of their environment and lives,” he added. “I hope the New York bar is able to rectify its actions so as to restore its reputation and integrity, and set itself on the right side of history.”

Simon Taylor, a co-founder of Global Witness, also weighed in for Donziger.

“What seems to be happening to Steven Donziger, given evidence in the public domain, is a serious case of judicial harassment - a sham process, wrapped up by the gentile world of the New York Bar as legitimate,” said Taylor. “The attacks on Steven seem to have all the hallmarks of the kind of bullying and persecution we have documented and witnessed in countries around the world, where threats to corporate interests result in vicious counter-attacks.

“Mr. Donziger now appears to have joined a long list of the persecuted, and I am particularly shocked that this is taking place in New York—a jurisdiction with a proud reputation for its fight against corruption and the corrupt,” Mr. Taylor added. “The fact that this is happening on the basis of highly suspect evidence, and possibly false witness testimony, raises the distinct possibility that Mr. Donziger is being framed.  It is critical that this ‘process’ be monitored by all concerned to protect the rule of law and the maintenance of free, open, and accountable societies - and that is precisely what we will be doing.”

A graduate of Harvard Law School, Donziger has been called a “hero” of the environmental movement by Greenpeace USA co-founder Rex Weyler while environmental defenders have lauded his work in helping Ecuadorian villagers hold Chevron accountable for what is considered the worst oil-related catastrophe in the world. (See here for testimonials.) The findings by Judge Kaplan that formed the basis for Donziger’s bar suspension without a hearing have largely collapsed. (See here for an explanation of Chevron’s RICO fraud and the collapse of the Kaplan findings.)

Donziger is challenging the suspension of his license with a hearing scheduled for Nov. 7 in New York City. Taylor said Global Witness intends to monitor the proceeding. Donziger is also scheduled to speak Nov. 12 at a major conference on Indigenous rights and the environment in Canada that will include participation from prominent Indigenous leaders and academics from around the world. (See here for registration.)

The following media articles detail the treatment by Mr. Donziger by U.S. authorities over the last few years:

The following videos discuss the merits of the underlying environmental litigation that Mr. Donziger assisted with in Ecuador: