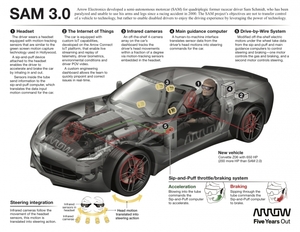 CENTENNIAL, Colo., May 12 /CSRwire/ - Since 2013, Arrow Electronics has teamed with former racecar driver Sam Schmidt to evolve the Arrow SAM Car, a semi-autonomous car loaded with technological innovations that Arrow hopes will one day have broader applications for independent living.

Schmidt is an ideal advocate for this effort. Although he has been paralyzed from the chest down since a racing accident in 2000, he hasn’t let his injury set him back. He’s always retained his passion for automotive technology, and, as current Verizon IndyCar Series team co-owner, his love for racing.

Driving the Arrow SAM Car, last year Schmidt reached 152 mph in a pre-race demonstration at the 100th running of the Indianapolis 500. He topped 80 mph racing up Pikes Peak, one of the tallest mountains in Colorado. And he also became the world’s first quadriplegic ever licensed for street-legal driving, in Nevada. This weekend, Schmidt will compete against one of the biggest names in racing: Mario Andretti.

The Schmidt vs. Andretti Showdown
To showcase to the world the promise of SAM Car technology, on May 13 Schmidt will race head to head against racing legend Mario Andretti—who will also be driving a SAM car—on the permanent road course at Indianapolis Motor Speedway. This is the first time two semi-autonomous cars have raced, and the first time that Schmidt has gone head-to-head against another driver since his professional racing days.

The 2017 SAM Car Showdown will benefit Conquer Paralysis Now, a nonprofit established by Schmidt and a leading authority on spinal cord injury treatment and research.

About the SAM Car Technology
Since the project’s beginning, the SAM Car team’s objective has been to improve lives by applying technology in new ways. It’s working, and the technology keeps improving.

Here’s how it works:

“Over the past four years the SAM Car team has successfully applied technology in innovative, humanitarian ways to improve lives,” said Joe Verrengia, Arrow’s global director of corporate social responsibility. “Our plan is to extend the reach of this work by openly sharing all the software and tech developed for the car with the world’s developer and engineering communities. We sincerely hope that these highly promising applications will be expanded upon to deliver broader solutions for independent living.”

The SAM Car project is a collaborative venture between Arrow Electronics, Schmidt Peterson Motorsports, Conquer Paralysis Now and Lingenfelter Performance Engineering. Keep up with the SAM Car project on Twitter by following #ArrowDriven.

About Arrow Electronics
Arrow Electronics is a global provider of products, services and solutions to industrial and commercial users of electronic components and enterprise computing solutions. Arrow serves as a supply channel partner for more than 125,000 original equipment manufacturers, contract manufacturers and commercial customers through a global network of more than 465 locations serving over 90 countries. Learn more at fiveyearsout.com