Landmark Forest Conservation Program on Pace to Restore and Protect More Than 540,000 Acres 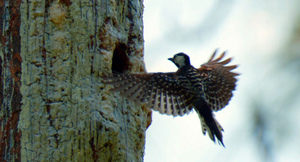 WASHINGTON, D.C., Apr. 19 /CSRwire/ - The National Fish and Wildlife Foundation (NFWF) and International Paper (NYSE: IP) today announced that IP has renewed its five-year commitment while increasing its overall contribution to $10 million to Forestland Stewards, one of the most effective public-private forest conservation partnerships in the United States. In the first four years of the initial five-year commitment, the partnership has funded 44 projects that have restored, enhanced or protected more than 190,000 acres of forest habitat

The projects targeted three specific landscapes in the United States — the low country of North and South Carolina; the Cumberland Plateau in Kentucky, Tennessee, Alabama and Georgia; and the piney woods on the Louisiana-Texas border. Because of the effective conservation successes within these landscapes, International Paper and NFWF will expand the partnership into a fourth landscape, the Lower Mississippi Alluvial Valley, in a concentrated effort to restore and protect bottomland hardwood forests and associated wildlife, including migratory and wading birds, wintering waterfowl, and other terrestrial and aquatic species.

“Our entire business depends on the sustainability of forests,” said International Paper Chairman and CEO Mark Sutton. “Through this expanded collaboration with NFWF, we will continue to promote responsible forest stewardship and ensure healthy and productive forest ecosystems for future generations.”

Forestland Stewards began in 2013, when International Paper made its first five-year commitment of $7.5 million to restore, protect and enhance 200,000 acres of Southern pine, oak and savanna woodlands across eight southern states. These forests were selected because they represent some of the most biologically diverse natural areas in the world, providing habitat for numerous at-risk, threatened and endangered species such as the red-cockaded woodpecker, gopher tortoise, songbirds, freshwater mussels and rare plants. In addition, these forests are a significant source of wood products that are important to local economies.

As the initiative enters its fifth year of grant-making under the initial commitment, the partnership anticipates that it will exceed its original five-year goal, with more than 240,000 acres restored and protected once all projects are completed

“The Forestland Stewards Initiative has achieved tremendous success by bringing together business leaders, landowners, public agencies and conservationists to restore and protect some of the most iconic forests in the United States,” said Jeff Trandahl, executive director and CEO of NFWF. “This public-private partnership serves as an outstanding model for landscape-scale conservation, and its renewal will bolster and expand ongoing conservation efforts to create seamless forest habitats for wildlife and support local economies.”

Forestland Stewards works with private landowners, government agencies and conservation groups on strategic forest restoration, enhancement strategies such as prescribed burning, and protection of key tracts of land within wildlife corridors and existing hubs of forestland. The program has leveraged conservation investments to benefit fish and wildlife and to assist landowners in improving forest management practices for “working” forests, a critical contributor to responsible stewardship of forest resources. And, through its competitive grant process, the Forestland Stewards Initiative has leveraged International Paper’s initial $7.5 million investment to generate more than $24.5 million in matching contributions, for a total conservation impact of approximately $32 million.

About International Paper
International Paper (NYSE: IP) is a leading global producer of renewable fiber-based packaging, pulp and paper products with manufacturing operations in North America, Latin America, Europe, North Africa, Asia and Russia. We produce packaging products that protect and promote goods, and enable world-wide commerce; pulp for diapers, tissue and other personal hygiene products that promote health and wellness; papers that facilitate education and communication; and paper bags, cups and food containers that provide convenience and portability. We are headquartered in Memphis, Tenn., and employ approximately 55,000 colleagues located in more than 24 countries.  Net sales for 2016 were $21 billion.  For more information about International Paper, our products and global citizenship efforts, please visit internationalpaper.com.

About the National Fish and Wildlife Foundation
The National Fish and Wildlife Foundation (NFWF) protects and restores our nation’s wildlife and habitats. Chartered by Congress in 1984, NFWF directs public conservation dollars to the most pressing environmental needs and matches those investments with private contributions. NFWF works with government, nonprofit and corporate partners to find solutions for the most intractable conservation challenges. Over the last three decades, NFWF has funded more than 4,500 organizations and committed more than $3.8 billion to conservation projects. Learn more at www.nfwf.org.