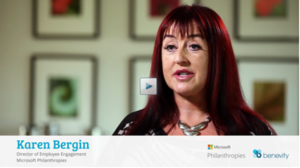 Microsoft released the results of their employee-giving program for 2016 on March 1. For the third straight year, the multinational technology company based in Redmond, Washington, surpassed their participation rate and total donations from the previous year and by meaningful measures.

“Microsoft is prolific at ingraining Goodness into the DNA of their culture,” said Bryan de Lottinville, founder and CEO of Benevity. “Over the last few years we’ve been working together, the Microsoft team have made smart program changes to remove barriers to participation. They have successfully leveraged the Spark technology to manage recurring giving through payroll, and, perhaps more importantly, empowered their employees to donate any amount of time or money to the causes that matter to them through a single, easy-to-use solution. We’re very proud to be a part of their success.”

In 2016, Microsoft employees raised $142 million for nearly 19,000 nonprofits and schools. Employees increased their support through time, money and talent vs. the previous year by $17 million, marking the greatest year-over-year increase in the program’s history and the sixth year in a row that employees have donated more than $100 million. In 2016, employees’ participation was at 74 percent, an increase of 3 percent compared with 2015.

“Technology has the power to uplift, to connect, and perhaps most important, to save lives,” said Mary Snapp, corporate vice president at Microsoft Philanthropies. “Together with our grantees, partners and employees around the world, Microsoft Philanthropies is using the power of technology to help those impacted by some of the world’s biggest challenges, including economic disruption, inequality, disasters, war and famine.”

About Benevity
Benevity, Inc., a certified B Corporation, is the global leader in online workplace giving, matching, volunteering and community investment software. Many of the world’s most iconic brands rely on Spark, Benevity’s award-winning Cloud solution, to power corporate “Goodness Programs” that attract, retain and engage today’s diverse workforce by connecting people to the causes that matter to them. With software that is available in 15 languages, to several million users around the world, Benevity has processed over a billion dollars in donations to more than 100,000 global charities. Learn more at www.benevity.com.