Survey aimed at measuring Hispanic inclusion at Fortune 100 and HACR Corporate Member companies in the areas of Employment, Procurement, Philanthropy, and Governance 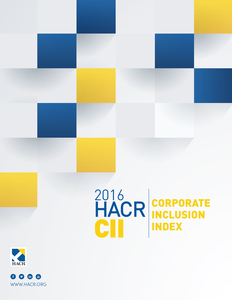 The survey, led by the HACR Research Institute, is aimed at measuring Hispanic inclusion strategies at Fortune 100 and HACR Corporate Member companies in the areas of employment, procurement, philanthropy, and governance.

“On behalf of the HACR Board of Directors we want to thank all the companies who participated in this year’s survey,” said Cid Wilson, President & CEO of HACR. “Your participation, transparency, and commitment to Hispanic inclusion are critical to ensure the success of the HACR Corporate Inclusion Index.”

Key findings from the 2016 HACR CII include:

• 15 of this year’s participants have improved their rating from 2015 which reflects their commitment to diversity and Hispanic inclusion.

• Hispanics comprise an average of nearly 15 percent of the total reported employee base for the 2016 HACR CII participants.

• Nearly all participants (96 percent) reported working with trade associations and other organizations who serve Hispanic vendors.

• Hispanics held just over seven (7) percent of board seats amongst the participating companies.

• Fewer than five (5) percent of executive officer positions were held by Hispanics.

“The data is moving in the right direction, but there is still work to do,” said Dr. Lisette Garcia, HACR Senior ­­­Vice President and Chief Operating Officer. “The responsibility to do better is HACR’s as much as it is that of companies. HACR will continue to work with those companies who are ready to make significant strides and improve their standing in the Hispanic community both within and outside their company.”