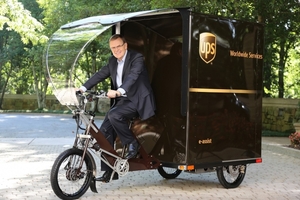 David Abney, UPS Chairman and CEO, on the eBike.

ATLANTA, Dec. 07 /CSRwire/ - UPS (NYSE: UPS) today announced its first eBike in the U.S. This new electrically-assisted tricycle began delivering packages in  Portland, Ore., on November 21. UPS anticipates this eBike prototype could become a component of its delivery capabilities in some other cities across the country. The deployment of the eBike is part of UPS’s ongoing commitment to reduce carbon emissions as city populations and e-commerce grow, and traffic, noise and air quality challenges continue to rise.

“Early in our 109 year history, UPS operated as a bike messenger company,” said Mark Wallace, UPS senior vice president global engineering and sustainability. “While we have evolved and developed a vast network of ground and air vehicles, the bicycle may be making a comeback as we navigate through crowded urban areas and continue our focus on environmental sustainability.”

The success of this pilot program was first demonstrated in 2012 in collaboration with the city of Hamburg, Germany. It focused on developing a new and sustainable method of delivering goods to urban areas. UPS placed four containers at central locations in the city for interim storage of packages for UPS service providers. From these points, deliveries were made on foot or with specialized bicycles called “Cargo Cruisers,” UPS’s electronically-assisted tricycles. These alternate delivery solutions helped ease traffic congestion and reduce emissions each working day. Due to the success of the pilot, the Hamburg program was extended in February 2015 for another two years. That model serves as a guidepost for the company’s new program in Portland, Ore.

“Portland, like all cities, is looking for ways to fight urban congestion and pollution,” said Portland Mayor, Charlie Hales.  “It’s great when a company like UPS brings us a unique solution that will help us combat climate change and protect the environment.”

Portland was a logical choice for the first U.S. deployment as UPS already uses traditional bicycles for delivery seasonally in the city.

The eBike is equipped with battery-powered electric motors that makes it possible to cover further distances, carry substantial loads, and navigate hills and other terrain. Maximum energy efficiency is achieved when combining battery power and human power simultaneously. The eBike can be operated solely on battery power or pedal power. During the testing phase, UPS will evaluate the reliability, design, integration to the city’s infrastructure and acceptance of the vehicle.  If successful, UPS envisions additional eBike deployment and testing in 2017.

By the end of 2016, UPS will have invested more than $750 million in alternative fuel and advanced technology vehicles and fueling stations globally since 2009. Using its “Rolling Laboratory” approach, UPS deploys more than 7,700  low-emission vehicles to determine what works best in each situation. From old-fashioned pedal power and electric-assisted bicycles in dense urban areas like London and Hamburg to electric and hybrid electric vehicles in the U.S., and natural gas, renewable natural gas and propane globally, UPS puts sustainability innovation into action, all over the world.

About UPS
UPS (NYSE: UPS) is a global leader in logistics, offering a broad range of solutions including transporting packages and freight; facilitating international trade, and deploying advanced technology to more efficiently manage the world of business. UPS is committed to operating more sustainably – for customers, the environment and the communities we serve around the world.  Learn more about our efforts at ups.com/sustainability. Headquartered in Atlanta, UPS serves more than 220 countries and territories worldwide. The company can be found on the web at ups.com® and its corporate blog can be found at longitudes.ups.com. To get UPS news direct, visit pressroom.ups.com/RSS or follow @UPS_News on Twitter.