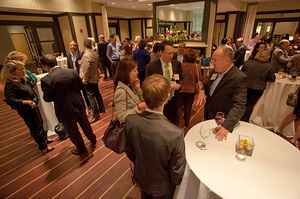 These companies and individuals were nominated for the Corporate Responsibility Impact Awards by members of the public in recognition of their outstanding contributions and commitment to creating positive social impact in their communities. The winners will be celebrated at the Corporate Responsibility Impact Awards reception on Dec. 1, 2016, at the Pullman San Francisco Bay hotel in Redwood City.

“The award winners are truly inspiring representatives of global corporate responsibility,” said Maeve Miccio, vice president of corporate responsibility at SVCF. ”Their commitment to finding solutions to today’s social and environmental challenges is unmatched, and they are shining examples to all companies working to make an impact.”

More than 100 guests, including representatives from startups, multi-national corporations and nonprofit partners, will attend the reception Dec. 1 to celebrate the winners. Event registration is available online at siliconvalleycf.org/crimpactawards.

Company of the Year: Tableau Software

This award honors a company that through its activities and partnerships clearly demonstrates its commitment to corporate responsibility as part of its core business values.

Tableau Software extended the company’s mission – to help people see and understand their data – to their social impact mission. Tableau supports nonprofit organizations that want to use data and analysis to solve world problems. Combining product donation, skills-based volunteering and dollars-for-doers programs, 1,462 Tableau employees helped 2,675 nonprofits with $12.4 million in grants and 8,740 volunteer hours worked since the fall of 2014.

Past winners of the company of the year award include Microsoft (2013) and Symantec (2014).

Partnership of the Year: Charles Schwab and Boys & Girls Clubs of America

This award is given to a company that has maintained a strong community partnership with a nonprofit organization for a period of three years or longer, and continues to develop and deepen the partnership for increasing societal impact.

Charles Schwab, through its foundation,  has had a longstanding partnership with Boys & Girls Clubs of America (BGCA) in providing critical financial education to Club teens via a program called “Money Matters: Make It Count.” Since the program launched in 2004, more than 725,000 teens in nearly 1,700 Boys & Girls Clubs across the United States and in military installations across the globe have participated in Money Matters. It continues to be among the fastest growing teen programs offered through the Clubs. Schwab has developed deep relationships with local Clubs through employee volunteerism, local giving and board service. Employees are uniquely positioned to share their financial expertise with youth who participate in the Clubs.

In 2014 the winners of the partnership award were Lockheed Martin and Industry Initiatives for Science and Math Education (IISME).

Emerging Practitioner of the Year: Cammie Erickson
This award is given to an emerging change-maker who strives for excellence in the practice of corporate responsibility.

Cammie Erickson leads LinkedIn for Good's employee engagement programs. Described by her peers as one of the most inspirational people they have worked with, Cammie is building a purpose-driven culture at LinkedIn by inspiring all 9,000+ employees across 30 cities to engage in skills-based volunteering and giving programs. These include LinkedIn's signature EngageIn program, which connects underserved youth to economic opportunity, and LinkedIn Gives, an innovative employee crowdfunding platform that Cammie helped launch earlier this year.

Prior to joining LinkedIn, Cammie spent seven years working in the social sector – first at Ashoka, the world's largest network of social entrepreneurs, and then at BSR,  a global nonprofit business network and consultancy dedicated to sustainability. Cammie holds a bachelor’s degree in public policy from Duke University and is pursuing an M.B.A. at UC Berkeley’s Haas School of Business, where she is a Forte Fellow and 2014 Public Service Scholarship Recipient.

Practitioner of the Year: Gisela Bushey
This award honors an individual who sets the gold-standard example for his or her efforts in corporate responsibility.

Gisela is an accomplished nonprofit corporate responsibility professional who, over the past 15 years, has built a successful, service-driven career founded on creating high-value philanthropy and community engagement programs. Gisela is described by her peers as a visionary architect and inspirational leader who thrives in cultivating and nurturing corporate culture that embraces service to the global community. She believes that effective philanthropy and high-impact community support programs are at their most successful when they align vision, innovation and resources. She has developed comprehensive grantmaking and community engagement programs for three global technology corporations, and has grown three local initiatives into worldwide hunger relief, children’s health and K-12/STEM annual campaigns.

Gisela's innovative approaches to employee engagement and volunteerism have positively impacted children and families from cradle to career. Her efforts have increased brand equity and employee job satisfaction at SanDisk (a Western Digital brand), where, over six years, Gisela’s employee volunteerism and community engagement efforts worldwide increased participation from 14 percent to 92 percent in one year, and sustained this over-90-percent engagement level for the last three years.

The winner of this award in 2014 was Colleen Cassity of Oracle.

Davis Smith’s leadership in corporate responsibility was described by his Cotopaxi staff as “intrepid.”  Davis volunteers hundreds of hours each year to support a variety of community initiatives. He is actively involved on the boards of three nonprofit organizations and is one of nine members of the United Nations Foundation’s Global Entrepreneurs Council.

Davis is passionate about effective responses to the global refugee crisis and has launched fundraising efforts, awareness campaigns and corporate engagement opportunities in response. His most recent wedding anniversary was spent visiting refugee camps and developing a stronger understanding of the refugee crisis in the Middle East and Europe. Davis has embedded social impact in the core of Cotopaxi, and is an authentic and visionary leader devoted to advancing the role of businesses as a force for good.

Past winners in the CEO of the year category were Sanjay Mehrotra of SanDisk (2013) and Aaron Levie of Box (2014).

Silicon Valley Community Foundation advances innovative philanthropic solutions to challenging problems. As the largest community foundation in the world, we engage donors and corporations from Silicon Valley, across the country and around the globe to make our region and world better for all. Our passion for helping people and organizations achieve their philanthropic dreams has created a global philanthropic enterprise committed to the belief that possibilities start here.
Learn more at siliconvalleycf.org.