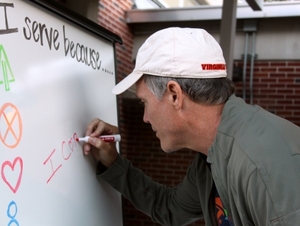 Ed Jenkins, Vice President of Market Strategy and E-Business at CSX, shares his reasons for helping enhance the school and its grounds.

JACKSONVILLE, Fla., Nov. 08 /CSRwire/ - As a part of its series of volunteer events across its network, CSX hosted a day of service at Mt. Herman Exceptional Student Center, part of Duval County Public Schools, in Jacksonville, Fla. on Saturday, November 5. CSX employees gathered with school leaders and teachers, along with the company’s national service partners City Year and Action for Healthy Kids, to complete projects to make the school cleaner and greener, and encourage physical activity among students.

Volunteers spent most of the day outdoors, creating a pathway for students to get fresh air outside of classrooms, constructing picnic tables and benches for the school’s outdoor learning area, and making improvements to the playground area, including adding paver stones and building garden beds.  Volunteers also painted safety-themed murals on the school’s playground fence.

“This opportunity has provided our school with amazing upgrades and learning enhancements that would not be possible without the partnership with CSX, Action for Healthy Kids and City Year – and all of the volunteers who gave of their time,” said Linda Pratt, Mt. Herman Principal.

CSX has strong ties to Jacksonville, where some of its predecessor railroads began operating more than a century ago. Today, CSX operates four major facilities and its corporate offices in the city, and nearly 3,500 CSX employees live and work in the Jacksonville area.

“As a leading transportation company, local employer, and community member, it’s our responsibility to be a connector,” said Tori Kaplan, assistant vice president, corporate social responsibility, CSX. “We move important products to communities through our rail network, and we also bring people together in service to make a positive influence, just like we did here at Mt. Herman.”

To see photos and posts from the event, check out social media posts with the hashtag #LocalMotive, an ongoing conversation about the company’s presence in the communities it serves through volunteerism, job creation, and transportation.

About CSX
CSX, based in Jacksonville, Florida, is a premier transportation company.  It provides rail, intermodal and rail-to-truck transload services and solutions to customers across a broad array of markets, including energy, industrial, construction, agricultural, and consumer products.  For nearly 190 years, CSX has played a critical role in the nation’s economic expansion and industrial development.  Its network connects every major metropolitan area in the eastern United States, where nearly two-thirds of the nation’s population resides.  It also links more than 240 short-line railroads and more than 70 ocean, river and lake ports with major population centers and farming towns alike.  More information about CSX Corporation and its subsidiaries is available at www.csx.com. Like us on Facebook (http://facebook.com/OfficialCSX) and follow us on Twitter (http://twitter.com/CSX).

CSX Corporation, based in Jacksonville, Fla., is one of the nation's leading transportation companies, providing rail, intermodal and rail-to-truck transload services. The company's transportation network spans approximately 21,000 miles, with service to 23 eastern states and the District of C...