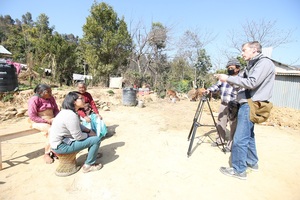 WASHINGTON, Jun. 08 /CSRwire/ -  The Hilton Prize Coalition, an independent alliance of the 20 winners of the Conrad N. Hilton Humanitarian Prize, announced the release of its short documentary film, “On Shifting Ground,” about the disaster relief efforts of development organizations in Nepal following the 2015 earthquake. The film will premiere at Devex World 2016 in Washington, DC on June 14.

On April 25, 2015, a 7.8 magnitude earthquake struck Nepal. The earthquake and aftershocks killed over 8,000 people and injured more than 21,000. Among those who mobilized staff and resources in the world’s response to this disaster were six Hilton Prize Coalition member organizations that were embedded in Nepal – BRAC, Handicap International, Heifer International, HelpAge, Operation Smile and SOS Children’s Villages. Operating in Nepal before, during and after the earthquake, these organizations bridge the humanitarian divide between first responders and development agencies. The staff leveraged their longstanding history and roles in the impacted communities to achieve uniquely localized relief efforts, which helped to mitigate the long-term damage and loss of life.

Nine months after the disaster, these organizations came together under the Hilton Prize Coalition Storytelling Program to share their experiences both during and immediately following the earthquake. Over the course of February 2016, photojournalist and filmmaker Steve Connors traveled throughout Nepal to capture stories told by staff working on the ground. Supporting Mr. Connors was a crew comprised of individuals from the different Coalition member organizations. From this collaborative vantage point, the film provides a first-hand appraisal of the way these best-in-class development organizational structures stood up to disaster, and brings attention to the issues around collaboration and the humanitarian-development divide. In a blog post about her experience as a crew member during filming, Ms. Rasmi Dangol of HelpAge International Nepal wrote: “Each one of us is now back to our work, busy as always. But every now and then, I take a moment to think and remember that one month – where all five of us, representatives from organisations who barely knew one another, just clicked and brought this documentary into fruition in a spirit that was almost extraordinary on its own.”

“On Shifting Ground” is a documentary that is part of the Hilton Prize Coalition’s Storytelling Program, which was conceived to serve as a tool for collaboration. Said Ann Canela, Vice President of Global Impact, the Coalition Secretariat, “The production of this film demonstrates the Coalition’s new theory of change around collaboration, with the Storytelling Program as the first stage of a multi-stage model designed to engage and be replicated by other NGOs working in a particular region or concentration.”

The stages of the Storytelling Program play out through the implementation of the pilot. The Coalition members conceived and produced the film in collaboration with one another. The process of storytelling itself revealed alignments between the participating organizations, which in turn led to the initiation of a series of informal collaborations around program delivery and direct service. Post-production, the Coalition is now formalizing these efforts into a framework for collaboration between members that includes the placement of a Collaborative Fellow in Nepal to serve as a shared resource and the development of protocols for disaster relief and resiliency. As these collaborations develop, the Coalition will synthesize the lessons learned from both the disaster response in Nepal and the Storytelling Program to share with all its members as well as with the global NGO community. Preparations are underway to distribute the film and resulting lessons after its premiere at Devex World 2016.

As Nepal’s focus shifts from recovery to rehabilitation, the Hilton Prize Coalition aims to capture and broadcast the invaluable voices of those on the ground, both in times of stability and in times of disaster, and to build a storytelling movement that amplifies the voice of the community. Lessons learned from the Hilton Prize Coalition Storytelling Program about collaboration will serve the broader humanitarian and development sectors for years to come.

The documentary will be featured at Devex World on June 14, 2016. If you would like to host a screening of the documentary, please contact Ann Canela at ann.canela@charity.org.

About The Hilton Prize Coalition
The Hilton Prize Coalition is an independent alliance of the 20 winners of the Conrad N. Hilton Humanitarian Prize. This network of best-in-class organizations works together to advance their unique missions and to realize significant collective impact in humanitarian assistance, human rights, development, education and health worldwide. The Coalition seeks to leverage the resources, talents and expertise of each of its members to better achieve their respective missions, to contribute experience and insight to the field through innovation, and to establish and document best practices and thought leadership to be shared with the global NGO and donor communities. The Coalition operates two Signature Programs: The Fellows Program seeks to develop a robust pipeline for future social sector leaders, while The Disaster Resiliency and Response Program seeks to create efficiencies and increase effectiveness in disaster response initiatives among Coalition member organizations.

Governed by a Board comprised of the leaders of the Prize-winning organizations, the Coalition is led by the Executive Committee and Global Impact as its Secretariat. The Coalition receives generous support for operations from the Conrad N. Hilton Foundation.

About Global Impact
Global Impact is a leader in growing global philanthropy. The organization builds partnerships and raises resources that help the world’s most vulnerable people by providing integrated, partner-specific advisory and backbone services; campaign design, marketing and implementation for workplace and signature fundraising campaigns; and fiscal agency, technology services and integrated giving platforms. Global Impact works with nearly 450 public and private sector workplace giving campaigns to generate funding for an alliance of more than 120 international charities. Through strategic council and implementation support, Global Impact equips private sector and nonprofit organizations to achieve their philanthropic goals. The organization also serves as administrator for four of the world’s largest workplace giving campaigns, including the Combined Federal Campaign of the National Capital Area (CFCNCA) and the Combined Federal Campaign-Overseas (CFC-O). Since 1956, Global Impact has generated more than $1.7 billion to help the world’s most vulnerable people.