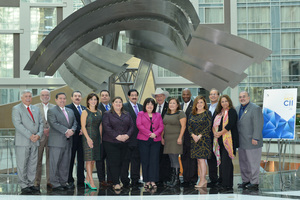 HACR Board of Directors

WASHINGTON, Nov. 20 /CSRwire/ - The Hispanic Association on Corporate Responsibility (HACR), one of the nation’s leading Hispanic advocacy organizations, released today the results of its 2015 HACR Corporate Inclusion Index (HACR CII). The HACR CII is a component of HACR’s Corporate Accountability Strategy and measures Hispanic inclusion at Fortune 100 companies and HACR Corporate Member companies. The results of the 2015 HACR CII indicate that nearly 25 percent of this year’s returning participants have improved their rating from 2014, which reflects a commitment to diversity.

Since 2009, the HACR CII has tracked trends in Corporate America in four areas: Employment, Procurement, Philanthropy, and Governance. HACR focuses on these four areas of corporate social responsibility and market reciprocity to measure the inclusion of Hispanics in Corporate America. HACR’s mission is to advance inclusion to a level commensurate with the economic contributions of Hispanics in the United States, currently the nation’s fastest growing consumer segment.

Key highlights from this survey include:

The HACR CII is conducted annually by the HACR Research Institute, led by Dr. Lisette Garcia. The Institute is devoted to objective research, analysis and publication of Hispanic-related issues in Corporate America.

“On behalf of HACR’s Board of Directors, we congratulate all of this year’s HACR CII participants for their commitment to Hispanic inclusion,” said Dr. Lisette M. Garcia, senior director of the HACR Research Institute. “Forward thinking companies such as these recognize that diversity and inclusion is not only the right thing to do, it’s also the smart thing to do. More companies should follow this lead in using data and analytics to identify gaps to help impact change and keep up with the demands of the ever changing diverse marketplace.”

The complete 2015 HACR Corporate Inclusion Index can be found on HACR’s website, www.hacr.org.

Founded in 1986, the Hispanic Association on Corporate Responsibility (HACR) is one of the most influential advocacy organizations in the nation representing 16 national Hispanic organizations in the United States and Puerto Rico. Our mission is to advance the inclusion of Hispanics in Corporate America at a level commensurate with our economic contributions. To that end, HACR focuses on four areas of corporate social responsibility and market reciprocity: Employment, Procurement, Philanthropy, and Governance.