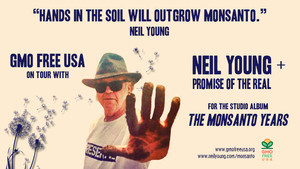 UNIONVILLE, CT, Sep. 29 /CSRwire/ - On the heels of a successful July tour, GMO Free USA will again be joining Neil Young + Promise of the Real for their October #RebelContentTour promoting the new studio album, The Monsanto Years. The tour kicks off October 1st in Missoula, Montana, and wraps October 17th in Berkeley, California.

Neil Young’s “Activist Village” - a coalition of leading national nonprofits - will be traveling with the band, raising awareness and educating concertgoers about industrial agriculture, environmental issues, and the negative impact of corporate control of government. GMO Free USA will be hosting the GMO education tent, while Move to Amend, Center for Biological Diversity, CSG (formerly The California Grange), and Earth Island Journal will host tents under their respective issue areas. The five host organizations will be bringing in local nonprofits to promote local initiatives, such as the GMO crop cultivation ban effort underway in Lane County, Oregon, and Initiative 735 in Washington state for a resolution urging the federal proposal of a constitutional amendment to abolish the doctrines of "corporate constitutional rights" and "money equals speech."

Diana Reeves, GMO Free USA Executive Director, connected with many farm belt residents during the July tour. “I heard story after story from residents who were concerned about increasing rates of cancer. ‘My father has cancer. My aunt has cancer. My neighbors have cancer,’ said one concertgoer. At another venue we met a couple - he was a cancer survivor and his very pregnant wife was battling cancer. It was heartbreaking. We heard stories from farmers who have no choice but to grow GM crops because they are surrounded by neighbors who are growing them. We were told that they were certain they would be sued by Monsanto if they grew non-GMO because contamination by pollen drift would be inevitable. But they’re afraid to speak out. These GMO growers are their neighbors. Their friends. Even their family members.”

Reeves founded GMO Free USA with the organization’s first and ongoing campaign, a national boycott of the Kellogg Company. Kellogg’s net sales have been down for seven out of eight quarters. “The great thing about the boycott is that it happens at a personal level and you can effect change without having ‘activist’ stamped on your forehead. It only takes one major food company to change the entire industry. America doesn’t want GMOs. The faster Kellogg’s gets the message, the faster their financial outlook will improve. I’m looking forward to connecting with people along the West Coast, educating and growing the boycott.”

Thousands of educational brochures about GMOs and postcards informing people of the Kellogg’s boycott were distributed in all the cities during the July Midwestern and East Coast tour. The nonprofit anticipates a similar reception for the West Coast tour leg, which includes stops in Montana, Washington, Oregon, California, Nevada, and Vancouver, Canada.

“The public response during the July tour was overwhelmingly positive. We imagined there would be more resistance to the information we were distributing in the Midwestern GMO agriculture belt. But what we found was strong support. There was only one incident in Lincoln, Nebraska - I was approached by a Dekalb (Monsanto brand) salesman who taunted me, proudly proclaiming that GMOs and toxic chemicals ‘are feeding the world’. But he couldn’t cite any evidence to back up his claim when pressed. He just kept repeating ‘GMOs are feeding the world’ over and over, like a robot. These poison pushers need to be called out when they lie and attempt to deceive the public. Neil had the courage to record an unreserved album about the most pressing issues in this country and on this planet. There is too much at stake today to be silent or passive,” says Luan Van Le, GMO Free USA Communications Director.

“The Monsanto Years are here and we are living them. Monsanto is the poster-child for what is wrong with corporate controlled government in our world. The Monsanto Years encompasses several associated subjects that millions of people worldwide are concerned about and active in. Earth is not ours. We are of the Earth. That's how I feel. When we plunder our own home we hurt our children and their children after them. I feel responsible,” says Young.

The Activist Village adds a festive and complementary element to the tour for Neil Young + Promise of the Real's new album. The media are encouraged to attend and to report on the concerns of engaged citizens.

GMO Free USA is a 501c3 nonprofit that educates consumers and other stakeholders about the potential hazards of GMOs. GMO Free USA advocates for the application of the Precautionary Principle and the removal of GMOs from the food supply until they are proven safe: www.gmofreeusa.org Press may contact Diana Reeves or Luan Van Le at 347.921.1466 or info@gmofreeusa.org