Back to the Roots® & Sodexo, Partner to Undo Food™ in Thousands of Schools Nationwide, Bringing Gardens into the Classroom

A unique approach to learning and healthy eating by leading services provider Sodexo and innovative Bay Area start-up Back to the Roots® will grow a half million pounds of food in 2,300 hundred classrooms 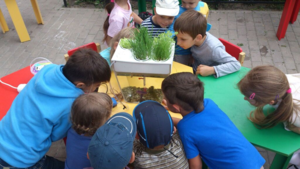 OAKLAND, Calif., Sep. 25 /CSRwire/ - Today, Back to the Roots®, a Bay Area food start-up and one of Forbes’ 25 Most Innovative Consumer Brands, and Sodexo, a Global Fortune 500 leader in facilities management and foodservice operations, announced a partnership to expand on the company’s unique mission to Undo Food™. The partnership will focus on bringing fun, Ready to Grow classroom products, and simpler, more flavorful, and more nutritious Ready to Eat food to thousands of Sodexo locations nationwide. Efforts will begin immediately in K-12 schools across the United States, and ultimately be made available to universities, hospitals and corporate offices as well. This partnership will have a direct and immediate impact on youth education via nutrition awareness and encouragement of healthy lifestyle adoption given the easy, hands-on learning opportunities created by Back to the Roots and the reach of Sodexo, which serves nearly three million meals per day to students at almost 500 school districts.

To kick off the partnership, Back to the Roots and Sodexo are supplying 2,300 schools across the United States with the Back to the Roots Garden Toolkit – including the Organic Mushroom Mini Farm, Garden-in-a-Can (organic basil & cilantro), and Water Garden (classroom aquaponics kit). This fall teachers will be able to use the Garden Toolkit and associated curriculum to help their students rediscover the origin of food. As the gardens are harvested over the next five years, they will deliver up to a half million pounds of food. Schools will use part of the harvest for instruction and make the rest available for donation to local community food banks.

“The impact of the school gardening concept is undeniable, with some programs reporting increases on standardized testing and others citing more than 90 percent improvement in student engagement around gardening programs,” said Scott Loretan, global head of marketing, Sodexo Schools. However, the prevalence of these programs is less common in schools with economically disadvantaged student populations. This program will bring the garden opportunity to all students, teaching them lessons in sustainability and wellness right there in the classroom; taking ‘locally sourced’ to a whole new level.”

Sodexo will also be exploring new product offerings for its school districts later this year with the Back to the Roots Organic Stoneground Flakes breakfast cereals. The cereals are the first 100 percent stoneground breakfast cereals on the market—keeping the entire grain intact during the milling process – and use entirely identity preserved, U.S. grown, organic, and non-gmo grains. Sodexo and Back to the Roots will initially launch with three flavors—each made with just four ingredients or less—California Whole Wheat, Purple Corn, and Cocoa Clusters.

“What’s so exciting to us is that this partnership isn’t just about what we have now but also about what we’re going to develop together in the future,” say co-founders Nikhil Arora and Alejandro Velez. “Sodexo is committed to our mission to Undo Food™ and in partnership with their large, passionate network of team members, we have the chance to rapidly improve the food system for millions of kids across the country.”

“Our school district partners have told us they need high-quality, ‘clean’ foods, and working with Back to the Roots is a huge step forward in helping meet that need while also supporting the actual education process,” added Loretan.

About Back to the Roots

Back to the Roots was founded in 2009 by then college seniors Alejandro Velez and Nikhil Arora after discovering how to grow gourmet mushrooms on recycled coffee grounds. Since then, Back to the Roots has evolved from urban mushroom farming to a thriving business on a mission to undo food and reconnect families to it through fun, innovative, and delicious Ready to Grow and Ready to Eat products (Organic Mushroom Farm, Water Garden, Garden-in-a-Can, Organic Stoneground Flakes cereals, and Organic Breakfast Toppers). Back to the Roots currently sells its products in over 14,000 stores worldwide, including Whole Foods Market, Target, Costco, The Home Depot, Nordstrom, Petco, Cost Plus World Market, Loblaw, Giant Eagle, Wegmans, The Fresh Market, Crate & Barrel, Urban Outfitters, Safeway, and Kroger.

Nikhil and Alejandro have been honored with several awards recognizing their efforts in sustainability and entrepreneurship including BusinessWeek’s “Top 25 Entrepreneurs under 25,” Inc.’s “30 Under 30,” Inc. 500, Forbes’ “30 Under 30,” and CNN’s “10 Next Entrepreneurs to Watch.” In addition, Back to the Roots was named a 2013 Martha Stewart Top Ten American Made honoree and recognized by President Obama as Champions of Change.

About Sodexo in North America

Sodexo, Inc., the leading Quality-of-Life services provider in the U.S., Canada, and Mexico, delivers On-site Services in Corporate, Education, Health Care, Government, and Remote Site segments, as well as Benefits and Rewards Services and Personal and Home Services. Sodexo, Inc. is headquartered in Gaithersburg, Md. and funds all administrative costs for the independent and charitable Sodexo Foundation – granting more than $25 million since 1999 to end childhood hunger in America. Visit the corporate blog at SodexoInsights.com. Visit Sodexo on Facebook and follow on Twitter @SodexoUSA.