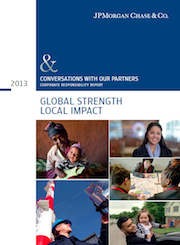 This year’s report features conversations among some of the firm’s key partners, stakeholders and executives in which they discuss their perspectives on these challenges and how the private, public and nonprofit sectors can work together to create opportunities for more people, preserve our natural environment and foster the fundamental conditions for widely-shared prosperity.

“At JPMorgan Chase, we believe we have a responsibility to be part of the solution to the world’s most pressing problems, not only because it’s the right thing to do but because our own long-term success depends on the success of our communities and the people, companies and institutions we serve,” said Jamie Dimon, Chairman and CEO at JPMorgan Chase. “In 2013, we used our size, scale and expertise to make a difference and to be a real, positive contributor to society, and we will continue to do so.”

An exclusive dialogue between Dimon and Walter Isaacson, President and CEO of the Aspen Institute, is featured in the report. They address issues ranging from how society can increase access to economic opportunity to how JPMorgan Chase is rebuilding confidence in the company and capital markets.

“Ongoing challenges have presented opportunities for JPMorgan Chase to work with great partners in the public, private and nonprofit sectors to find solutions that create greater opportunities for more people,” said Peter Scher, Executive Vice President and Head of Corporate Responsibility at JPMorgan Chase. “While there is more work to be done, we are proud to have rolled up our sleeves to break down the traditional barriers among the three sectors and developed and supported initiatives that will build stronger communities around the world – from the largest countries to the smallest towns.”

In 2013, JPMorgan Chase continued to drive economic growth in our communities. The firm:

Other highlights include how JPMorgan Chase: