Former U.S. Bank Regulator to Speak at Event for Responsible Journalism in Ecuador 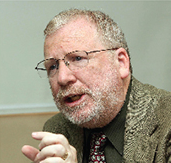 QUITO, Ecuador, Mar. 18 /CSRwire/ - ‘The Ecuadorian Miracle’ is the subject of the keynote lecture that former financial regulator and criminologist William Black will deliver this Wednesday at the Latin American Social Science Institute (FLACSO) in Quito.  The conference is part of the series of lectures and workshops leading up to this year’s edition of the Summit for Responsible Journalism, CUPRE 2014.

William Black is an associate professor of economics and law at the University of Missouri in Kansas City.  Black’s expertise includes white-collar crime, regulation, public finance and Latin American development.  He is the author of The Best Way to Rob A Bank is to Own One, was formerly the litigation director of the Federal Home Loan Bank Board and executive director of the Institute for Fraud Prevention.  He recently helped the World Bank develop anti-corruption initiatives.

On Monday, Black was invited by President Rafael Correa to attend the traditional weekly presidential changing of the guard.  During a press conference at the center gardens of the Carondelet Palace in Quito, Black highlighted that Ecuador’s current economic success is the result of President Correa’s ‘pragmatic policies’ and his spending on three key areas: infrastructure, health and education.  He also noted that the current administration has achieved a “combination of political stability, a significant reduction of poverty, inequality and unemployment”.

The Summit for Responsible Journalism, CUPRE, which attracts journalists, academics and students from many Latin-American countries is a regional initiative supported by Ecuador’s Secretariat of Communications.  The purpose is to promote a transparent and honest journalism without restrictions.

Mr. Black’s lecture, ‘The Ecuadorian Miracle’ will take place in the Auditorium of the Latin American Social Science Institute, FLACSO, in Quito this Wednesday, March 19 at 9:00 AM.