Based on GRI and UN Global Compact 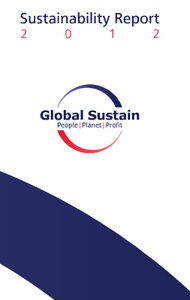 ATHENS, BRUSSELS and MELBOURNE, Nov. 27 /CSRwire/ - Few days after the official announcement of its new corporate identity, Global Sustain presents to stakeholders its first Sustainability Report, for the reference year 2012. One year ago the company published its first Communication on Progress which represented the company’s inaugural public communication to stakeholders on the progress made after implementing the Ten Principles of the UN Global Compact.

The Sustainability Report is the solid proof of the firm’s commitment to sustainability and transparency, based on global standards. The Report, partially assured by EY, unveils the management practices and the results of the company’s actions and conforms to the international guidelines of Global Reporting Initiative (GRI), and UN Global Compact Principles.

The Report is structured according to the following sections:

Marketplace
In this section, the financial and social contribution of the company is described, presenting elements that relate to its responsible operation. The company increased its turnover compared to 2011, paid 50% more in salaries, compensation and other benefits, financed two NGO projects, while it conveys data from the recent member stakeholder survey. According to the latter, 86.96% of respondents believe that the company enjoys a good level of credibility and effectiveness.

Human resources
Human resources constitute the most dynamic element for Global Sustain’s growth, and this is why the firm systematically invests in finding, selecting, evaluating, retaining and developing its people. In 2012, Global Sustain increased the number of employees as well as training hours.

Society
At the end of each fiscal year, Global Sustain donates a percentage of its pre-tax profits to non-profit projects carried out by Non-Governmental Organisations, with the aim of helping fund specific social, environmental or other needs in the citizen sector. Moreover, the company and its ambassadors pro-actively support and often participate in local and national events and campaigns that focus on raising awareness on a number of pressing and important issues, in close collaboration with local organisations and corporate members.

As Mr. Michael Spanos, Managing Partner of Global Sustain quoted: “Our first Sustainability Report is a milestone in our company’s history. It constitutes an integral and important part of our business strategy, our operations and values, as dedicated sustainability ambassadors. This first attempt is just one step on a long journey, but we are fully committed to this path, and look forward to improving ourselves and our company.”

The Global Sustain Sustainability Report is available at www.globalsustain.org as well as here as an e-book.