Kohl’s Department Stores (NYSE: KSS)today announced that the company will expand its solar program by nearly 25 percent in 2012, installing solar panels at approximately 30 additional Kohl’s locations. While some of the new solar sites will be in states such as California, Connecticut and Maryland where Kohl’s already has a solar presence, additional sites will be located in new solar states for Kohl’s, including Massachusetts, New York and Ohio. On average, the solar panels will supply 20 to 50 percent of each store’s energy. Construction of the solar panel arrays on the first phase of stores began this spring. Once the installations are complete by the end of 2012, Kohl’s expects to have more than 150 solar locations across 13 states. 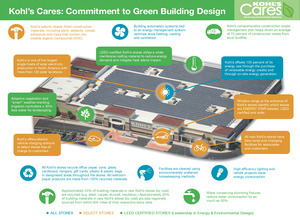 Kohl's green power and energy efficiency programs, including
solar, are key components of the company's commitment to
being a leading environmentally responsible retailer through
strategies that include sustainable operations, collaboration
throughout its supply chain and stakeholder engagement.

“After adding 20 solar locations in 2011, we’re pleased to continue growing our solar program in 2012,” said John Worthington, Kohl’s chief administrative officer. “Not only do our solar locations provide an immediate cost savings to Kohl’s, they serve as examples of our environmental commitment in action. As a national retailer with more than 1,100 stores, we consistently challenge ourselves to find new ways to reduce the operational footprint of our facilities, to be more energy efficient, use fewer resources and be a good neighbor in the communities where we do business. It’s exciting when we are able to add solar panels to a store, because it becomes part of a shopper’s Kohl’s experience. Even if they can’t immediately see the solar panels on the roof – similar to how they might not see all of the characteristics that make a store ENERGY STAR-labeled or LEED-certified, they know Kohl’s is working to be a good environmental steward and to make responsible choices about how we operate our stores.”

Kohl’s launched its solar program in 2007 with the installation of solar panels at its Laguna Niguel, Calif. store. The company has continued to expand the program to additional locations over the last five years where it is feasible and provides a cost savings. Currently, Kohl’s is one of the largest single hosts of solar electricity in North America and has more than 120 solar locations, including its Milwaukee photo studio and San Bernardino distribution center – the company’s largest solar panel array. With the completion of Kohl’s 30 new locations, the company’s portfolio of solar sites will produce more than 74.2 million kWh of energy annually – equivalent to preventing greenhouse gas emissions from 10,032 passenger vehicles or the carbon dioxide emissions from the electricity use of 6,380 homes for a year.

Through the on-site energy generation at Kohl’s solar locations, two wind locations and the purchase of renewable energy credits, Kohl’s offsets more than 100 percent of its conventional companywide energy use. The company continues to purchase renewable energy credits to offset the energy consumption of new stores and corporate locations and made a 2012 renewable energy purchase of more than 1.5 billion kWh. In recognition of these efforts, Kohl’s was named a Green Power Partner of the Year by the U.S. Environmental Protection Agency in 2011, 2010 and 2009. The company also makes energy efficiency a priority and currently has more 700

Kohl’s green power and energy efficiency programs are key components of the company’s commitment to being a leading environmentally responsible retailer through strategies that include sustainable operations, collaboration throughout its supply chain and stakeholder engagement.  Additional information about Kohl’s environmental efforts is available at www.KohlsGreenScene.com. Kohl’s comprehensive environmental program, Advancing Environmental Solutions, is part of the Kohl’s Cares® philanthropic platform, committed to making communities happier, healthier, greener places to live and work. Additional information about Kohl’s Cares is available at www.Kohls.com/Cares.

Based in Menomonee Falls, Wis., Kohl’s (NYSE: KSS) is a family-focused, value-oriented specialty department store offering moderately priced, exclusive and national brand apparel, shoes, accessories, beauty and home products in an exciting shopping environment. With a commitment to environmental leadership, Kohl’s operates 1,134 stores in 49 states. In support of the communities it serves, Kohl’s has raised more than $208 million for children’s initiatives nationwide through its Kohl’s Cares® cause merchandise program, which operates under Kohl's Cares, LLC, a wholly-owned subsidiary of Kohl's Department Stores, Inc. For a list of store locations and information, or for the added convenience of shopping online, visit www.Kohls.com, or join the discussion on Facebook http://www.facebook.com/kohls or Twitter http://twitter.com/Kohls.