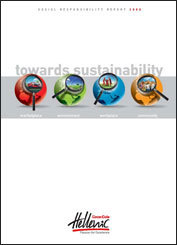 Climate protection and resource conservation have become primary focus areas for the Company’s CSR efforts. Over the course of 2008, construction began on the first of 15 combined heat and power (CHP) units. The units will collectively reduce carbon emissions from total manufacturing operations by approximately 20%. A unit in Romania will be operational by the end of July, followed by units in Northern Ireland and Italy later in the year.

Other energy-reduction programmes initiated by Coca-Cola Hellenic included the development of an energy-saving device for coolers and a commitment that all new coolers will be at least 50% more energy efficient than current models. This shift to energy-efficient coolers will result in an annual reduction of 29,000 tonnes of CO2 each year from coolers purchased in 2008 alone. Vehicle efficiency was also targeted by energy-reduction programmes. In particular, the Company instituted a Safe and Eco-Driving project in every country of operation with the aim of reducing fleet emissions by an estimated 13,000 tonnes annually.

Water protection and conservation efforts achieved notable successes in 2008. Water-use efficiency in operations improved by 4% over the prior year and, for the first time, an absolute reduction in water-use of 1% was recorded despite an overall increase in production volume. As a result of such efforts, Coca-Cola Hellenic's water use ratio has declined by 22% since 2002. Additionally, more than 94% of Coca-Cola Hellenic wastewater is now treated before release, with 100% targeted by the end of 2010. Involvement in "Green Danube" and other community water partnerships continued to grow in 2008, with watershed protection projects for major rivers and their environs taking place in 26 countries of operation.

The total amount of recycled PET used by Coca-Cola Hellenic in new plastic bottles in 2008 increased by 67% over 2007 levels. In addition, approximately 13 million tonnes of packaging waste was collected through Recovery Organisations of which the Company is a shareholder. All recycling targets were met in the EU Member States in which the Company has operations.

Coca-Cola Hellenic continues to focus on catering to consumer trends for health and wellness products. Juices, waters and other still beverages now comprise 38% of total volume, up from 10% in 2001. Since 2001, the average calorie content of products distributed by the Company has also decreased by 19%.

Other CSR efforts included physical education initiatives for Company employees and consumers, and the rollout of a data collection and reporting tool from the British Standards Institute called Entropy to monitor and report on health and safety in the workplace in real time.

In continuing to build on its CSR progress in 2008, Coca-Cola Hellenic strengthened partnerships, especially its support of UN Global Compact Local Networks. During the year, the Company repeated its successful Stakeholder Panel to discuss and address the main impacts of its business. Comments from external stakeholders who attended this panel are included in the CSR Report for 2008.

Finally, in 2008, the efforts of Coca-Cola Hellenic were acknowledged with listings on the Dow Jones Sustainability World and STOXX (European) Indexes. The Company also maintained its listing on the FTSE4Good Index.

About Coca-Cola Hellenic
Coca-Cola Hellenic is one of the world's largest bottlers of products of The Coca-Cola Company with sales of more than 2 billion unit cases. It has broad geographic reach with operations in 28 countries serving a population of approximately 560 million people. Coca-Cola Hellenic offers a diverse range of ready-to-drink non-alcoholic beverages in the sparkling, juice, water, sport, energy, tea and coffee categories. Coca-Cola Hellenic is committed to promoting sustainable development in order to create value for its business and for society. This includes providing products that meet the beverage needs of consumers, fostering an open and inclusive work environment, conducting our business in ways that protect and preserve the environment and contribute to the socio-economic development of our local communities.

Coca-Cola HBC is the second-largest bottler of the brands of The Coca-Cola Company in terms of volume with sales of more than 2 billion unit cases. It has a broad geographic footprint with operations in 28 countries serving a population of approximately 585 million people. Coca-C...