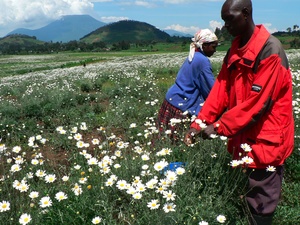 Jun. 02 /CSRwire/ - Ruhengeri, Rwanda - June 2, 2009 - SC Johnson announced today that it is initiating a partnership with a U.S. Agency for International Development-funded project starting this June to benefit thousands of Rwanda pyrethrum farmers by helping them enhance the collection, drying and transportation of higher-quality pyrethrum flowers. The 28-month long project endeavors to enable farmers to increase their families' income through enhanced production, as well as result in an increased supply of sustainable East African pyrethrum for key purchasers like SC Johnson.

The announcement was made by Mr. Célestin Kabahizi, governor of Rwanda's Western Province, at a ceremonial event held today at the headquarters of Société de Pyrèthre au Rwanda Co Ltd., known as SOPYRWA, in Ruhengeri, Rwanda. It was attended by Dennis Weller, Mission Director of USAID; Ted Abrahamson, Director of Global Procurement for SC Johnson; Dr. Tim Schilling, Director for Enterprise Development for the Borlaug Institute for International Agriculture; John Zigira, CEO of Horizon enterprises and Chairman of SOPYRWA; representatives from the Ministry of Trade as well as the Northern Province; several regional mayors and more than 50 pyrethrum farmers.

Pyrethrum is a natural insecticide extracted from the dried flower heads of chrysanthemums. Pyrethrins are fast acting and work as highly-effective insecticides. Natural pyrethrins are well-known for their non-persistence and biodegradability. They are used widely in homes around the world and used in some of SC Johnson's well-known consumer insecticides products like Raid(R).

"We're enthusiastic about the potential of this project to help increase incomes and the quality of life for thousands of Rwanda pyrethrum farmers, while boosting the sustainable supply of pyrethrum in East Africa," said Abrahamson. "SC Johnson is committed to partnerships of this nature that help drive local economic growth and improve livelihoods, while giving consumers quality products and services they value."

This project began because one farmer asked for help in drying pyrethrum flowers during a growers' town hall meeting in November 2007. SC Johnson identified this as one of the greatest challenges to consistent supply. In order to have a sustainable and high quality source of pyrethrum flowers they must be harvested at the proper times, dried correctly by growers and transported to SOPYRWA factory - Rwanda's sole processing plant for extracting and refining pyrethrum from dried chrysanthemum flowers - for registering and processing at their refinery. The new project will be focused on improving pyrethrum yields, quality and production through farmer organization, advanced technology and more effective agricultural practices.

The partners in this project estimate that world demand for pyrethrum is approximately twice as high as current supply. Enhancing the sustainability of Rwanda's pyrethrum industry is important to SC Johnson. The fertile volcanic soil, cool night temperatures and ample rainfall, along with the large number of small-holder farmers make Rwanda ideal for pyrethrum production. The company has purchased pyrethrum from East Africa for more than 40 years.

The Global Development Alliance as a public private partnership has been seen as a priority and an encouraged approach used by USAID to reach its economic growth objectives towards the farmers communities. The new public-private partnership project will be implemented through the Sustaining Partnerships to Enhance Rural Enterprise and Agribusiness Development project, also known as SPREAD, a USAID-funded project led by Texas A&M University's Borlaug Institute. SC Johnson and USAID will fund the project to meet goals and objectives laid out in the agreement.

"For the project, we're going to develop a geographic information system-based production decision support system for SOPYRWA, so they can better plan and control pyrethrum plant production and quality," said Schilling. "We're hoping to increase production from the 400 tons of dried flowers produced in 2008 to 1200 tons in 2010 while also increasing their pyrethrum content. This will lead to significantly increased returns for the py farmers."

The SPREAD-led project team will focus specifically on working with the farmers to setup a co-op that promotes best practices in terms of pyrethrum collection and transportation. It is also helping the two largest farmer groups or cooperatives of 4,000 Rwanda farming families reorganize into smaller grower groups of 30 to 50 members to allow more effective and better management. With these smaller grower groups the goal is to improve and accelerate the provision of extension services to farmers and disseminate best agricultural practices among farmers.

It will offer support to SOPYRWA in the design and implementation of a credit program to be made available to small growers groups, so that the grower groups may acquire the necessary information and begin buying materials for and constructing pyrethrum flower drying tables, including deciding where such tables would be located and how they should be managed. It also seeks to improve communication during harvesting season through the distribution of mobile phones to a representative of each of the smaller grower groups.

SPREAD project: The Sustaining Partnerships to Enhance Rural Enterprise and Agribusiness Development project, also known as SPREAD, is a USAID-funded project led by the Norman Borlaug Institute for International Agriculture. SPREAD and earlier associated efforts have been largely responsible for the turnaround in Rwanda’s coffee industry and its new-found reputation as a top "country of origin" for specialty coffee. Project efforts contributed significantly to Rwanda's selection as the first African country to host the prestigious Cup of Excellence international coffee competition in 2008. The project is also involved helping Rwandan farmers and agribusinesses with the production, processing, packaging and marketing of products made from cassava, as well as providing business and technical assistance that will benefit more than 2,000 Rwandan small-acreage chili-pepper farmers.

The Borlaug Institute: The Norman Borlaug Institute for International Agriculture was named for Dr. Norman Borlaug, Nobel Peace Prize laureate, father of the Green Revolution and distinguished professor at Texas A&M. Building on Dr. Borlaug's work, the mission of the institute is "to employ agricultural science to feed the world's hungry, and to support equity, economic growth, quality of life and mutual respect among peoples." For more information on the Borlaug Institute, go to http://borlaug.tamu.edu

U. S. Agency for International Development and Global Development Alliance: USAID provides assistance to poor and developing countries worldwide through technical assistance, training, infrastructure improvement, food aid, small-enterprise loans, and other means. The agency works in more than 100 countries, partnering with volunteer organizations, universities, businesses, international organizations, governmental and non-governmental groups, trade associations, faith-based organizations and others. It has working relationships with more than 3,500 companies and more than 300 U.S.-based private voluntary organizations. The Global Development Alliance is a public-private partnership used by USAID to stimulate economic growth, address businesses and workforce development, and improve access to education and technology. For more information on USAID, go to: http://www.usaid.gov/

SC Johnson is a family-owned and managed business dedicated to innovative, high-quality products, excellence in the workplace and a long-term commitment to the environment and the communities in which it operates. Based in the USA, the company is one of the world's leading manufacturers of household cleaning products and products for home storage, air care, personal care and insect control. It markets such well-known brands as EDGE(R), GLADE(R), OFF!(R), PLEDGE(R), RAID(R), SCRUBBING BUBBLES(R), SHOUT(R), WINDEX(R) and ZIPLOC(R) in the U.S. and beyond, with brands marketed outside the U.S. including AUTAN(R), BAYGON(R), BRISE(R), ECHO(R), KABIKILLER(R), KLEAR(R), and MR. MUSCLE(R). The 123-year old company, with more than $8 billion in sales, employs approximately 12,000 people globally and sells products in more than 110 countries. www.scjohnson.com