VIDEO: 2008 Year of the Frog Fights Against Amphibian Extinction Crisis 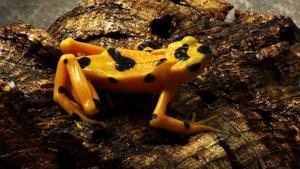 OAKLAND, CA -- (MARKET WIRE) -- 12/13/07 -- The Clorox Company (NYSE: CLX) has signed on as the first official corporate sponsor of Amphibian Ark's "2008 Year of the Frog," a campaign to raise public awareness and funds to help avert the pending amphibian extinction crisis. "2008 Year of the Frog" is a globally coordinated campaign -- led by the non-profit coalition Amphibian Ark -- to engage zoos, aquariums, corporate partners, governments, and the public in an effort to rescue endangered amphibian species that cannot be saved in the wild.

As many as 165 amphibian species may be extinct, with an additional one-third to one-half of the world's 6,000 amphibian species in danger of becoming extinct in our lifetime. While habitat destruction is a serious threat, the most immediate cause of amphibian decline is a parasitic fungus called amphibian chytrid, a disease that is deadly to hundreds of species and has quickly spread from Africa across the rest of the planet. Chytrid fungus is currently unstoppable and untreatable in the wild, where it can kill 80 percent of native amphibians within months.

As part of its sponsorship, The Clorox Company will donate Clorox(R) Regular-Bleach to aid in the halt of the spread of chytrid fungus. Clorox(R) Regular-Bleach, an EPA-registered fungicide, is one of the most important tools in Amphibian Ark's fight to save the frogs.* Frogs are treated with anti-fungal medicine and anything else that has contact with water during amphibian rescue is treated with a bleach solution, from boots and clothing to instruments and transport containers, to be sure researchers are not spreading fungus to new, uncontaminated areas. When zoos and aquariums bring frogs that cannot be saved in the wild into protective custody, their enclosures are treated with a bleach solution daily for the first weeks to be sure they remain fungus-free.

"We are grateful to Clorox for signing on as the first official sponsor of '2008 Year of the Frog and hope their commitment will encourage others to join this important global conservation mission,'" said Amphibian Ark Program Officer, Kevin Zippel. "Clorox's support, along with the donation of bleach for use in our efforts, will make a real impact for the cause."

Since it was introduced in 1913, Clorox(R) Regular-Bleach has a long history of use in places where killing pathogens is critical -- in hospitals, nursing homes, child-care centers and schools.

"When we heard about Amphibian Ark's campaign and learned that bleach played a critical role in its efforts, we wanted to help," stated Mary O'Connell, public relations director at The Clorox Company. "Amphibian Ark really is creating an ark in what's become a race to save frogs and other amphibians not from decline -- but from extinction. How could we not help?"

Conservation biologists refer to amphibians as "the canaries in the coal mine" -- they are among the first species to be affected by environmental stressors, so when they show declines in the wild, it serves as a warning to other species, including humans. Amphibians -- frogs, toads, salamanders, newts and caecilians -- are vital members of a delicate ecosystem as well as important environmental indicators and contributors to human health and wellness.

For information on how you can help or donate, go to www.savethefrog.com.

Amphibian Ark was founded by the IUCN/SSC Conservation Breeding Specialist Group (CBSG), the IUCN/SSC Amphibian Specialist Group (ASG), and the World Association of Zoos and Aquariums (WAZA) to carry out the emergency response component of the Amphibian Crisis Action Plan (ACAP), an overall plan to address the amphibian crisis that includes research, assessment, long-term conservation programs, and short-term emergency responses. Amphibian Ark will develop, promote, and guide short-term captive management of the most threatened amphibians that cannot be saved in the wild, buying valuable time to mitigate threats for species that would otherwise go extinct. Amphibian Ark supports the rescue of priority species and brings them into "protective custody" in dedicated biosecure facilities at zoos, aquariums, and other institutions around the world for safekeeping, breeding, and eventual release back into the wild when the original threats have been controlled. The Amphibian Ark plan requires $60 million in funding. Donations can be made to the Global Conservation Network, an IRS 501(c)3 that is part of the CBSG.

About The Clorox Company

The Clorox Company is a leading manufacturer and marketer of consumer products with fiscal year 2007 revenues of $4.8 billion. Clorox markets some of consumers' most trusted and recognized brand names, including its namesake bleach and cleaning products, Armor All(R) and STP(R) auto-care products, Fresh Step(R) and Scoop Away(R) cat litter, Kingsford(R) charcoal, Hidden Valley(R) and K C Masterpiece(R) dressings and sauces, Brita(R) water-filtration systems, and Glad(R) bags, wraps and containers. With 7,800 employees worldwide, the company manufactures products in more than two dozen countries and markets them in more than 100 countries. Clorox is committed to making a positive difference in the communities where its employees work and live. Founded in 1980, The Clorox Company Foundation has awarded cash grants totaling more than $69.7 million to nonprofit organizations, schools and colleges. In fiscal 2007 alone, the foundation awarded $3.4 million in cash grants, and Cloroxmade product donations valued at $5.9 million. For more information about Clorox, visit www.TheCloroxCompany.com.

*Organizations, including U.S. Geological Survey, recommend using a 1:10% solution of bleach to disinfect equipment that comes in contact with chytrid fungus.

At Clorox, we believe that the long-term health of our company depends on maintaining high standards of business conduct, integrity, safety, quality and respect for people and the environment in everything we do. Our corporate social responsibility principles reflect a deep commitment to uphold these standards. We've made this commitment to our shareholders, business partners, communities and each other because, in many instances, our standards demand more from us than what is legally required, and because it's the right thing to do.