The UPS Foundation Partners with Africare in Chad 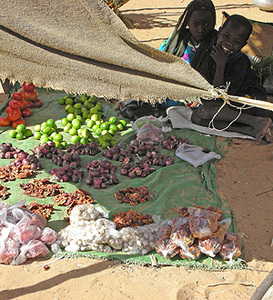 Vegetables at the market in UPS-supported Darfur refugee camp Gaga in Chad. Adults are provided with 1 hectare (2.5 acres) of land to cultivate vegetables. Garlic and onions are popular, as are tomatoes and limes.

Jan. 31 /CSRwire/ - WASHINGTON, D.C. - January 31, 2008 - It is hard to imagine- 17,500 refugees, more than half of them children, living in small tented communities in the Sahara desert. Fleeing violence in war-torn Sudan, these refugees have sought shelter in refugee camps throughout the Central African country of Chad. One of those camps is Gaga Camp, located 60 km from eastern Chad's main city of Abeche. For many, Gaga camp has become a new home away from home over the past three years. The camp opened in 2005; more refugees arrive every day.

The UPS Foundation today announced a $100,000 grant to Africare to fund improvements at Gaga Camp.

"The UPS Foundation has given more than a grant," noted Africare President Julius E. Coles. "It has provided resources to ensure that the mothers, fathers and children forced out of Darfur and into Gaga Refugee Camp will have good nutrition, and the tools to sustain that nutrition for the time they remain at the camp. Sustainability is key to the projects we implement at Africare, and the UPS Foundation has become a vital partner in that work."

Part of the market at UPS-supported Darfur refugee camp Gaga in Chad. This market is an important way for refugees to generate an income

Funding from The UPS Foundation will complement Africare's current assistance in improving the living conditions of the refugee population and surrounding villages with a focus on children with food deficiencies. Families under the grant are given plots of land to plant gardens using irrigation systems in order to produce an assortment of vegetables and crops to feed their own families, selling the excess crops at nearby markets. Badly needed agricultural inputs such as seeds and pesticides will be distributed, and light agricultural tools such as ploughs will be provided to facilitate the transportation of harvested products. Farmers will also be trained in vegetable production techniques, improvement of agricultural perimeters and consumption of crops to insure a well-balanced diet.

"Africare's approach to creating sustainable communities is perfectly in line with the mission of The UPS Foundation," said Lisa Hamilton, president of The UPS Foundation. "We seek projects that not only address emergency situations but that develop long-term solutions as well."

Gaga Camp is the 12th United Nations High Commissioner for Refugees (UNHCR) camp in eastern Chad, managed by Africare, a U.S.-based organization with a mission to improve the quality of life in Africa. Africare is responsible for the day-to-day management of the camp including the distribution of food and non-food items, the construction of infrastructures such as water and sanitation facilities, and supplying resources and training for capacity-building so that refugees can begin to support themselves.

To learn more about Africare and its work at Gaga Refugee Camp, click here:
http://www.africare.org/news/news_release/updateChad.html

To learn more about the UPS Foundation and its mission, click here:
www.community.ups.com