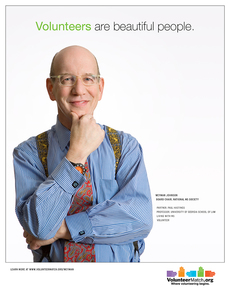 To inspire more Americans to get involved, VolunteerMatch joins with nonprofits on PSAs highlighting four of the nation's most distinguished volunteers

Apr. 14 /CSRwire/ - SAN FRANCISCO, CA. - April 14, 2009 - As part of its celebration of National Volunteer Week, VolunteerMatch has introduced a new awareness campaign recognizing the extraordinary impact of those who serve. The Inner Beauty campaign, featuring spots with the faces and stories of some of America's most distinguished volunteers, will coincide with important events on the 2009 volunteering calendar.

This year's National Volunteer Week begins April 19 against an historic backdrop of economic uncertainty, rising demand for nonprofit services, and unprecedented support for voluntary service. On Inauguration Day, hours after taking part in the biggest ever MLK Day of Service, President Obama recognized the impact of volunteers and called on Americans to serve with community organizations. This month, the President is expected to sign into law the Edward M. Kennedy Serve America Act, heralding a new era of service.

"It's a remarkable moment for volunteering in this country," said Greg Baldwin, president of VolunteerMatch, the Web's largest and most popular volunteer network. "We're honored to shine the spotlight on just a handful of these amazing men and women."

The Inner Beauty campaign features volunteers from four of the nation's most recognized and effective nonprofit organizations - National MS Society, American Red Cross, Easter Seals, and Girl Scouts of the USA. Each organization is a VolunteerMatch Preferred Partner, a service that enables their headquarters to coordinate volunteer recruitment and engagement at the chapter level through VolunteerMatch.

The four volunteers highlighted in the Inner Beauty campaign include:

About VolunteerMatch
VolunteerMatch is the Web's largest and most popular volunteer network, and is committed to strengthening communities by making it easier for good people and good causes to connect. Its award-winning online service, www.volunteermatch.org, helps visitors find local volunteer opportunities by location, interest area, and/or keyword. The VolunteerMatch network welcomed more than 10 million visitors in 2008, including millions of participants in employee volunteer programs, and has become the preferred volunteer recruiting service for more than 63,000 nonprofits.

VolunteerMatch is the Web's largest volunteer engagement network, strengthening communities by making it easier for good people and good causes to connect. Founded in 1998, the organization annually supports more than 11 million visitors, 96,000 participating nonprofits and 160 n...