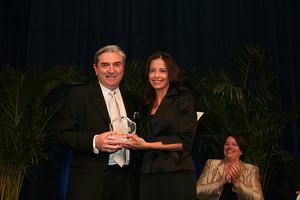 May 02 /CSRwire/ - ALEXANDRIA, VA - May 2, 2007 - Before an audience of nearly 900 at a gala in Washington, DC on April 25, the Arab American Institute Foundation honored Global Impact with its prestigious Khalil Gibran "Spirit of Humanity" Award for International Achievement. Launched in 1999, the award celebrates outstanding acts of leadership that promote the common good, as well as programs that foster democratic and humanitarian values across racial, ethnic and religious lines.

Global Impact was recognized not only for its efforts to assist those most in need across the globe, but also for its principal role in the U.S.-Lebanon Partnership Fund, a collaboration with the U.S. government and four corporate leaders to raise awareness and resources to help Lebanese communities rebuild after the 2006 conflict. Assistant Secretary of State for Educational and Cultural Affairs Dina Powell served as the U.S. government's chief liaison to the Partnership Fund and was on hand to present the "Spirit of Humanity" Award to Global Impact.

Accepting the award on behalf of Global Impact were President & CEO Renée S. Acosta and Kenneth Schaner, a member of Global Impact's board of directors. Schaner summoned Khalil Gibran's own words to describe the true impact of receiving such powerful recognition for the work Global Impact achieves. "As Gibran points out," he said, "'the significance of man is not in what he attains, but rather in what he longs to attain.'"

"At Global Impact, we are humbled and privileged to serve the deep longing of so many who strive to bring peace and justice in this world," Schaner continued. "First and foremost, we honor that longing among our member charities, who put that vision into action every day. It is a privilege and honor to accept the 2007 Kahlil Gibran Spirit of Humanity Award on behalf of all of those that Global Impact serves."

Global Impact is a not-for-profit organization dedicated to helping the poorest people on Earth. Established in 1956, it is the national leader in raising awareness and funds for 52 member charities. Among the most respected in the world, these U.S.-based international organizations touch 400 million lives each year in virtually every developing country in the world, through disaster relief, education, health training and economic programs that promote self-sufficiency. Since its inception, Global Impact has distributed nearly $500 million to its members.