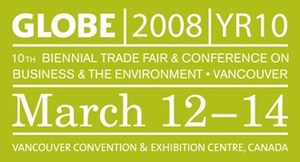 Oct. 09 /CSRwire/ - VANCOUVER, B.C. - October 9, 2007 - The GLOBE Foundation, producers of North America's preeminent event on the business of the environment, is preparing for the 10th event in its renowned GLOBE series, which is expected to host over 10,000 people (including 2,000 conference delegates, 400 exhibitors, 200 speakers) and dozens of international delegations from across the planet. GLOBE 2008 will be held in Vancouver, British Columbia from March 12 to 14, 2008 centering around three main themes; Corporate Sustainability, Energy & Climate Change, and Building Better Cities.

Confirmed Speakers for GLOBE 2008 include:

The GLOBE 2008 Trade Fair will feature the world's most innovative companies showcasing their innovations and capacity; and allow visitors to learn more about the most cutting-edge advances in environmental technology. The event will allow participants to learn from one another about future prospects in the multi-billion dollar environmental market. Over 75% of exhibit space already spoken for, including large showcases hosted by the provinces of BC, Alberta and Ontario; Austria; Belgium; France; Holland; Korea; the UK; and the USA.

GLOBE 2008 is produced by the GLOBE Foundation, an international consultancy in the business of the environment. GLOBE's expertise lies in project management, event development, and management and consulting in the fields of environment and energy, urban development, and corporate responsibility. GLOBE is North America's longest operating producer of environmental events, having produced the GLOBE series since 1993.

For the past 25 years, GLOBE Series has served as the nexus for global networking and leadership on the business of the environment. We’re about ‘Business Innovation for the Planet’ and thinking outside the box. GLOBE Series helps thousands of leaders devise winning strategies to spearhead the...