Submitted by: Pan-Massachusetts Challenge, The 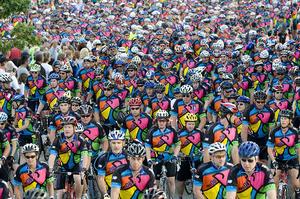 Despite Economy, Sum Raised is $2 million more than in 2007

The $35 million gift, announced by the organization tonight, is more than twice the amount ever raised for a charity by an athletic fundraising event in the country. It is the single largest contribution made to the Jimmy Fund, representing almost 50 percent of the charity's annual revenue.

"That the PMC exceeded its fundraising goal in this very troubled economy is a tribute to PMCers' commitment to raising money for cancer research and care," said Billy Starr, PMC founder and executive director. "It also shows that the importance of public and corporate funding for cancer research is widely understood."

The check was presented to Dana-Farber President Edward J. Benz, Jr., MD at a ceremony attended by 500 PMC cyclists and volunteers. The contribution represents 100 percent of every rider-raised dollar, a charity pass-through rate that is nearly unparalleled within the $1.64 billion athletic fundraising event industry. Since its 1980 inception, the PMC has raised and contributed more than $239 million to the Jimmy Fund. "The money the PMC raises is critical to our mission to eradicate cancer," says Dr. Benz. "It enables us to invest in major new patient care and research initiatives that could otherwise go unfunded."

In 2008, the PMC attracted 5,232 cycling fundraisers, about 300 more than last year. Riders came to Massachusetts from 36 states and eight countries. Each cyclist was required to raise between $1,300 and $4,000 to participate, depending on the chosen route. More than 90 percent of PMCers raised more money than they were required to, according to Starr. "Almost one-third of the pack raised twice as much, which is a testament to the PMC's fundraising culture," Starr said.

Founded in 1980 when 36 cyclists rode across Massachusetts and raised $10,200 for the Jimmy Fund, the PMC is known today as the "gold standard" of athletic fundraising events, due to the unprecedented sums it raises and its consistently efficient charity pass-through rate.

The PMC was among the very first athletic fundraising events in the nation and it was a pioneer in the way it focused on raising money for charity. While a handful of walks and rides were held to raise awareness about a cause, the PMC put fundraising first and continues to do so. Registrants must back their applications with credit cards to ensure their contribution commitments are met, whether they ride or not. The fundraising minimum increases considerably each year, yet the ride's most sought-after routes "sell out" by the first week in February, just weeks after registration opens.

This is the second straight year the PMC has been able to contribute 100 percent of every rider-raised dollar to the cause. Presenting sponsors, Boston Red Sox Foundation and Overstock.com, along with 200 other corporate sponsors, underwrite the cost of producing the event and provide in-kind contributions of goods and services. In addition, 2,800 volunteers work throughout the year and during PMC weekend, fulfilling many roles that are typically paid positions.

The 30th annual PMC is set for August 1 and 2, 2009. Registration opens online on January 12th for alumni and January 20th for newcomers. For more information about the Pan-Mass Challenge visit www.pmc.org.