Announcing the Winner of a Green-Themed Webisode Writing Contest 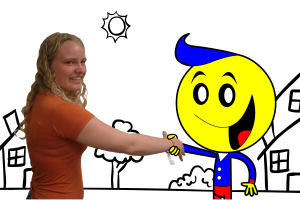 "I'm extremely excited about the winning storyline entry especially the fact that the action takes place in a roll-your-sleeves-up bootstrapping scene in a GARAGE--my favorite entrepreneurial metaphor," said Jeff Rozic, board of director member, Mentorography, Inc. Competition participants submitted original storyline scripts about the development of an eco-friendly car of the future that is 100% recyclable and runs on alternative energy. As the winner of the competition Seay-Klatt receives $1,000 along with a writing contract for the script she submitted, the opportunity to see her script produced into an animated carton at www.StartupTime.com and publicity about submitting the winning entry.

"If I do decide to become a screenwriter I would like it to be for something important, something that is thought-provoking," said Seay-Klatt about the type of screenwriting she would like to do in the future.

Stay tuned to www.StartupTime.com for the soon to be released next webisode of "The Commuter Pod" based upon Jessica Seay-Klatt's storyline script she submitted to win the competition.

"The Commuter Pod" Cartoon Write the Next Webisode Contest is produced by Mentorography, Inc. and sponsored by O.N.E.(TM) World Enterprises the makers of O.N.E.(TM) 100% Coconut Water and O.N.E.(TM) Amazon Acai. StartupTime's strategic partners include Plenty, BrainReactions and Writers Boot Camp.

Mentorography, Inc. is an Internet media company dedicated to inventing a better world today by inspiring young adults to create socially-responsible new ventures and content. Mentorographies impart the insights, driving philosophies and lessons learned of the socially-minded entrepreneur regarding their startup journey. www.StartupTime.com and www.Mentorography.com