Ben & Jerry’s produces a wide variety of super-premium ice cream and ice cream novelties, using high-quality ingredients including milk and cream from family farmers who do not treat their cows with the synthetic hormone rBGH. The company states its position on rBGH on its labels. Ben and Jerry’s products are distributed nationwide and in selected foreign countries in supermarkets, grocery stores, convenience stores, franchise Ben & Jerry’s Scoop Shops, restaurants and other venues. Ben & Jerry’s, a Vermont corporation and wholly-owned subsidiary of Unilever, operates its business on a three-part Mission Statement emphasizing product quality, economic reward and a commitment to the community. Ben & Jerry’s contributes a minimum of $1.1 million annually through corporate philanthropy that is primarily employee led. Contributions made via the Ben & Jerry’s Foundation in 2006 totaled almost $1.6 million. Additionally, the company makes significant product donations to community groups and nonprofits both in Vermont and across the nation. The purpose of Ben & Jerry’s philanthropy is to support the founding values of the company: economic and social justice, environmental restoration and peace through understanding, and to support our Vermont communities. For the full scoop on all Ben & Jerry’s Scoop Shop locations and fabulous flavors, visit www.benjerry.com.

BURLINGTON, VT - April 12, 2007 - Your local Ben & Jerry's has been hard at work preparing for another summer season filled with legend-dairy classics like Cherry Garcia, Phish Food and Chocolate Fudge Brownie as well as a few brand new flavors to please your palette and...

NEW ORLEANS--(BUSINESS WIRE)--Feb. 2, 2007--Ben & Jerry's brought its 2007 Global Franchise Community Gathering to New Orleans, to help the city continue rebuilding from the devastation of Katrina. The annual meeting was originally planned for Orlando, Florida, but was m... 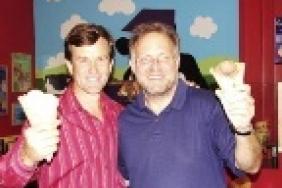 SOUTH BURLINGTON, Vt.--(BUSINESS WIRE)--July 26, 2006-- Just in time for the hottest days of summer, Ben & Jerry's is bringing milkshakes to the masses for some cool relief. Ben & Jerry's MilkShakes are a rich, creamy drinkable treat in three classic flavors from the...