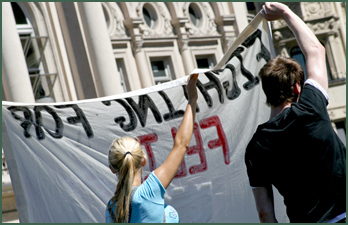 In The Service Of All Nations - rethos.com is Princeton University's Homegrown Platform For Change

May 11 /CSRwire/ - NEW YORK, NY – May 14, 2007 - FAIR is hosting the World Premiere of the Media Education Foundation's most recent film, War Made Easy: How Presidents and Pundits Keep Spinning Us To Death. "War Made Easy brings to...

May 03 /CSRwire/ - ADDIS ABABA and SEATTLE -May 03, 2007 - Representatives of the Government of the Federal Democratic Republic of Ethiopia and senior leaders from Starbucks Coffee Company today announced that they have completed two days of constructive discussions and the...

Apr. 17 /CSRwire/ - ADDIS ABEBA April 17, 2007 - Leaders and representatives of Ethiopian Fine Coffee Sector, farmers cooperative unions and exporters as well as representatives of relevant government bodies are gathering in Addis Ababa to be trained in trademarking and licensing...

Weekly insight and resource blog on issues in Asia, from AsiaInaugural issue examines North Korea, Pakistan, Thailand, and violence against women in Asia

REPORT: What Price Beauty? Risk Posed by Toxics in Cosmetics Could Leave Unwary Investors with a Black Eye

Royal Dutch Shell: Use your profits to clean up your mess

The Biggest Names in Entertainment Are Helping the Smallest Names in...

Supporting Our Employees During the COVID-19 Crisis

Leading and Learning in a Time of Crisis: Free Webinar on...