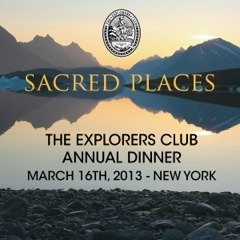 The first Americans to orbit the earth and Hollywood’s most adventurous filmmaker are among those who will be honored at the 109th annual The Explorers Club Annual Dinner (ECAD) on Saturday, March 16th at the Waldorf Astoria, New York.

This world-famous event is open to the public. For reservations: 212-628-8383, reservations@explorers.org.

ECAD is hosted by The Explorers Club, a global institution founded in 1904 to promote scientific exploration of land, sea, air, and space. Club member “firsts” include first to the Moon, first to both Poles, first to summit Mt. Everest, and first to the ocean’s deepest depth, among other feats of perseverance and courage.

This year’s ECAD theme, “Sacred Places,” highlights the majesty of outer space, mountain peaks, and the deep oceans, and will guide the transformation of the venue into a spectacle of remarkable imagery. The event is legendary for the unique experiences the evening has always provided, from honorees arriving in the Waldorf Ballroom by dogsled to an eagle landing on Neil Armstrong. Guests will enjoy a taste of ECAD’s signature cocktail hour, which features an array of sustainable drinks and delicacies crafted from exotic flowers, insects, snakes, and other creative sustenance. The dinner also includes surprise entertainment, exhibits, and a live and silent auction of one-of-a-kind items.

Among the medalists to be honored are Senator John Glenn and Scott Carpenter, the first and second Americans to orbit the earth, and James Cameron, a pioneer in deep-sea exploration to the Mariana Trench and director of Titanic and Avatar. The keynote speaker will be luminary Neil deGrasse Tyson, a leading scientist and author on outer space, host of Star Talk, and director of New York’s Hayden Planetarium.

An after-party (also available as a separate ticket) includes a special guest DJ who will keep the lively collection of astronauts, oceanographers, mountaineers, cavers, archaeologists, divers, submariners, and kindred spirits on the dance floor until midnight.

Major sponsors include Rolex and Eddie Bauer, which will have their own surprises in store for the attendees.

According to Alan Nichols, 38th president of The Explorers Club, "ECAD pushes the limits of event experience to honor those who push the limits of human endurance and imagination."

Tickets start at $375 per person. To reserve a table, seat, or ticket to the after-party, please visit www.explorers.org/index.php/store/category/ticket, email reservations@explorers.com, or call 212-628-8383.