EcoMind: Changing the Way We Think,...

EcoMind: Changing the Way We Think, to Create the World We Want 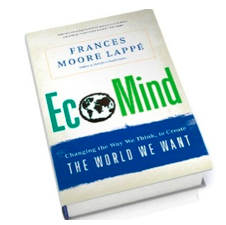 According to Frances Moore Lappé, a democracy advocate and world food and hunger expert who has authored or co-authored 18 books, the greatest problem we face is not the looming crisis of climate change, environmental degradation, and resource depletion (“peak everything”), but “Thought Traps” that keep us from dealing with them effectively. And she says we all must develop our “EcoMind,” -- using skills and instincts we already have -- to leverage our collective power to effect real change.

The visionary Moore Lappé introduces a new national conversation with this new series based on her acclaimed book EcoMind: Changing the Way We Think, to Create the World We Want, exclusively on CSRwire.

For the next several weeks, Moore Lappé will summarize the main points and key lessons of her book, leading with a dissection of her theory on mental maps and how we end up creating economic rules that actually violate the laws of nature and end up undermining our ongoing sustenance. Stay tuned!