Bridging the Gap Between CSR and...

Bridging the Gap Between CSR and Reality: Finding Long-term Leadership in Short-term Times

Some corporate leaders are mapping the way to bridge the gap between CSR ideals and reality. 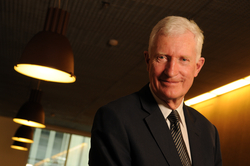 In the wake of a string of corporate scandals and failures, stock market meltdown and economic crisis, and in the face of looming other financial, environmental and social problems, it is small wonder that there is no lack of finger pointing or demands for deep change. Targets range from business, government, and consumers to certainly unstoppable globalization and technology. Even our much vaunted market system and capitalism itself are under fire.

Less frequently asked is whether business leadership, in its pivotal role, is up to the growing challenges and broadening responsibilities with which it is now confronted.

More precisely, can those at the corporate helm, but also those further down the line, keep their eye on the ultimate goal of long-term sustainable growth and profits in a world of strong countervailing forces? While Adam Smith’s “invisible hand” can work wonders when the market system’s firms are populated by the right leadership, it can evidently wreak havoc when not.

The Gap Between CSR Ideals & Reality

In their own defense, executives point out that they find themselves torn between what sounds theoretically right and the hard realities of practice. While in theory there seems to be a crying need for leadership that can perform today but also build, innovate, and transform for tomorrow, in practice financial and self-imposed pressures argue for the short-term at the expense of the long-term.

And while prudence should guide risk taking, recklessness rules when rewards are astronomical and

asymmetrical on the upside. Further, while in theory corporate social responsibility and ethics should be part and parcel of the business equation, in practice it is smarter to keep your head down when difficult choices are on the table.

What can be done?

We do not have to look far for clues since leaders in some notable industrial giants, like Nestlé, IBM, and HSBC to name but a few, and particularly family and social enterprise leaders, with their eyes on making a profit by making a difference, are showing the way. These leaders:

What Role Can Business Schools Play?

What can business schools do to prepare the way, and to complement the school of hard knocks?

These are tall orders for many of today’s business schools. But the “new business of business leadership,” unheralded as yet, is taking shape. The reshaping of leadership development cannot lag far behind.

It would be better to lead it.

Derek F. Abell will be a keynote speaker at the upcoming Who Cares Wins conference. Learn more and register now!