ESG, CSR & Positive Deviant Leadership: 12 Reasons To Be Hopeful In 2013 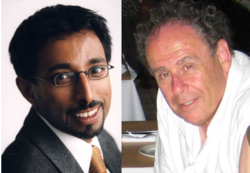 By Raj Thamotheram and Jack Gray

The Chinese word for “crisis” has two characters – “danger” and “opportunity.” Holding apparently contradictory ideas together isn’t easy. The crises are plain to see, unless we are paid not to see, but the opportunities aren’t so obvious.

#OccupyWallStreet showed that citizens can set the agenda, for example, on inequality.  Now there are corporate executives who accept the need for higher taxes.

More broadly, inescapable transparency means unethical or illegal corporate and political behavior is being exposed faster than ever before. Politicians are being forced to act. While Iceland is the clear leader today - most politicians are either too co-opted or too frightened to act – this trend promises to gather pace. NGOs like Avaaz, Purpose, and Asset Owner Disclosure Project are mobilising pension fund members. As this internet-enabled anarchy of the wronged gathers strength, institutional investors could be the cavalry.

One prediction for 2013: watch how corporate tax avoiders, private equity and tax havens are forced to become less anti-social.

2: Consumers Act With Their Wallet

Going beyond putting pressure on existing players, consumers are moving from big banks to

credit unions and supporting alternative currencies, both of which now have the potential to attract a critical mass necessary for mainstream change.

Wall Street lost the Presidential election, the influence of the US Chamber of Commerce is seriously diminished and corporate fines have never been greater.

Of course this shift shouldn’t be overstated.

Big tobacco is able to challenge governments who want to crack down on advertising. Dirty energy companies are able to ensure minimal action on climate change and “bad Pharma” is able to resist disclosure of clinical trial data. But things will change as society learns how pervasive this type of behaviour is.

After Hurricane Sandy, Mayor Bloomberg said that the risks were so serious that all elected officials should be “compelled” to take action. What if he scaled up Bloomberg’s already impressive but niche ESG measurement services and enabled the mainstreaming of climate change risks/opportunities? What if he used his influence with elected NY pension fund trustees?

As severe weather events increase in frequency and severity, more opinion-shapers will come off the fence. It’s impossible to over estimate the significance of this trend, yet it is clearly not just the so-called elites: for the first time since 2008, more than half (54 percent) of Americans believe global warming is caused mostly by human activities, 88 percent want the U.S. to make an effort to reduce global warming even if it has economic costs and 61 percent support a carbon tax.

Whether you think its right or wrong for pension funds to invest in weapons manufacturers, what’s clear is that U.S. asset owners have had a wake-up call, likely to be as effective as the TV

documentary about cluster bombs, which kicked off the ESG mainstreaming trend in the Netherlands.

Leaving aside specific controversies, however, asset owners have undeniably learned that they can’t just focus their ESG activity on equities – that they have to do better due diligence on all asset classes—and the importance of the social component.

No longer can the low hanging fruit of eco-efficiency and box ticking corporate governance be good enough strengthening the case for stronger supply chain management by asset owners.

The list of business advocates has continued to grow with Michael Jensen on integrity, Lucien Bebchuk and Lawrence Lessig on corporate political donations, Jeffrey Sachs and Simon Johnson on economic fundamentalism, Jack Bogle on conflicts of interest amongst fund managers, Sheila Bair on regulatory capture, Andrew Lo and Paul Woolley on dysfunctional financial theory and markets, and Jeremy Grantham on climate change.

Even current CEOs are adapting.

Unilever’s Paul Polman – a former CFO – has stopped quarterly reporting and most recently, investment leaders in the 300 Club are challenging “business as usual.” Although core institutional change is still ways away, there are some interesting “bolt on” experiments being tested. The CFA Institute, for example, is co-sponsoring the Systemic Risk Council with known contrarians like Sheila Barr and Paul Volcker.

Despite vigorous opposition, the EU has acted on probably one of the best ways to address excess market short-termism. While the proposal has all sorts of exceptions and become confused with revenue generating and anti-bank debates, the path forward is clear.

Having led decades of a race to the bottom in terms of regulation, there are hopeful signs, not least recent proposals by the Bank of England and the U.S. Federal Deposit Insurance Corporation about systemically important financial institutions.

There is much greater awareness of the extremely wasteful aspects of ideologically driven competition between pension funds and efforts are finally underway to consolidate the industry like in Sweden, where six funds will be collapsed into three and perhaps even one. There is also more collaborative action on systemic risks like climate change.

Even to mainstream institutions like the IMF, the writing is clear on the wall Those who are pushing it through or sitting on the fence will pay the price when the public finally understands the pain was not only unnecessary but also harmful.

With much debate about the anti-social nature of MBAs, students are responding with efforts like the MBA Oath,

even if not all academics are showing the leadership needed.  Perhaps most significantly, fewer MBAs are going into finance.

The U.S. Business for Social Responsibility conference is generally considered the ultimate conference for CSR issues. While the examples of good practice are real, the self-congratulatory dialogue of the converted, year after year, seemingly ignoring the huge gap between what is happening and what needs to be happening, has been very worrying.

This year however, the mood shifted with self-critical reflection amply visible across panels and workshops. Hopefully this critical self-reflection will now spread to the ESG community, a prerequisite for the much-needed renewal of PRI and ICGN.

What do all of these trends have in common for the year ahead?

They are stories of taking action of a particular kind. These self-activated organizations are doing what their peers and wider society would (and did) say isn’t possible or isn’t even worth trying. It is this a sort of positive deviant leadership that gives rise to real hope, quite different from the unconvincing optimism that often permeates the CSR/ESG discourse.

Is the CSR/ESG community part of the solution or part of the regarding these 12 trends? We'll focus on this question in our next piece.

The authors would like to thank Pavan Sukhdev, Paul Dickinson, Keith Johnson, Nick Silver, Aidan Ward and others for the brainstorming that contributed to this piece.

Jack Gray is an investment adviser and an Adjunct Professor at the Paul Woolley Centre for Capital Market Dysfunctionality, University of Technology, Sydney) with pretensions to be a CIO = Chief Irritating Officer.