Corn Is Us: 6 Steps to Drought-Proofing Your Diet

As drought becomes the “new normal,” our diets will have to adapt to become healthier for humans and the planet.

If one could live on peaches alone, this would be the summer to do it. Scorching temperatures and persistent drought have been devastating to most farms, sending corn and soybean prices soaring as fields dried out and crops withered.

But if anything good has come of this heat, it is that it hastens maturity and boost the levels of fruit's natural sugars, rendering peaches, watermelon, cantaloupes and the like sweeter than ever.

But as it happens, we don't live on peaches, we live on corn, and as a consequence, are seriously vulnerable to extreme weather-driven crashes in the corn market.

Corn is us, as Curt Ellis and Ian Cheney, the "King Corn" documentarians discovered back in 2007. They had their hair analyzed for the film and learned that the high carbon content found in it (over 50 percent) was coming from corn.

It really shouldn't surprise us that today two 20-something men could be half corn. As Derek Thompson, Senior editor at The Atlantic graphically reveals, the average American consumes about 42 pounds of high-fructose corn syrup annually. That's almost 11 teaspoons of corn sugar per day, or almost twice what the American Heart Association recommends a woman consume, and about 25 percent more than what a man should take in.

“Nearly 10 percent of the calories Americans consume now come from corn sweeteners; the figure is 20 percent for many children,” best-selling author and UC Berkeley professor, Michael Pollan, explains in a New York Times opinion piece. “Add to that all the corn-based animal protein (corn-fed beef, chicken and pork) and the corn qua corn (chips, muffins, sweet corn)” and you have an industry that has turned “us (along with several other equally unwitting species) into an expanding race of corn eaters.”

An expanding race of corn eaters, indeed. Just look at the trend lines.

As the cheaper corn sweeteners grew in market share, so have rates of obesity and Type 2 diabetes. The problem with HFCS, researchers are finding, is that it is taken up almost exclusively by the liver where it can be re-packaged as fat and produces harmful by-products in the process.

In contrast, the fructose in raw fruit, including this summer's delicious peaches, is encased in a fiber-rich flesh that slows and reduces its absorption in the body and its metabolism in the liver, serving as a sort of antidote to the negative effects of HFCS metabolism.

Corn is not so good for animals either, even though most of the corn grown in the U.S. -- about 80 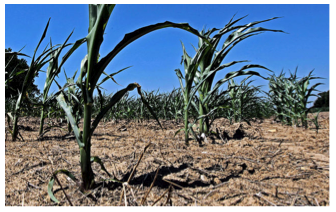 percent according to the National Corn Growers Association -- is fed to domestic and overseas livestock, poultry, and fish production.

Though less is known about how fish fare on such a diet, research suggests they might do no better than corn-fed cattle. Ruminants, as explained here, are not well suited for a diet of corn and other grains, the primary feed on industrial feedlots. Corn -- high in starch, low in roughage and a poor source of calcium and magnesium -- makes a cow's stomach unnaturally acidic. This not only makes the cow sick but also provides an ideal environment for a whole range of parasites to grow, including the pathogenic E. coli 0157:H7 bacteria.

In turn, the corn-fed beef is not so good for those of us who eat it. Not only is it loaded with antibiotics that the steer was dosed with in order to fight off bacterial infection, the meat is high in artery-clogging saturated fats. In contrast, beef from cattle fed grass, a diet for which their pH-neutral gut is better suited, is lower both in overall fat and in saturated fat, and has the added advantage of providing more omega-3 fats and up to four times more vitamin E than meat from feedlot cattle.

As with beef, the health benefits of eating fish hinge on what that fish eats. Salmon fed corn oil, a study reveals, is much less good for you than the wild salmon that eats a diet that suits it better: other fish.

So, does the drought of 2012 finally give the lie to the "cornification" of the American diet, a term 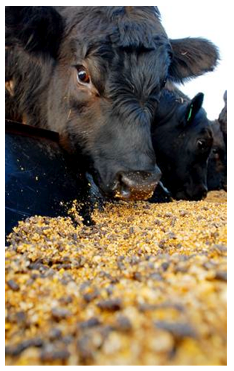 coined by Michael Pollan? As the drought drives up prices on all corn-derived products, including milk, eggs, beef and processed foods, it seems like a good time to ask ourselves whether a diet so dependent on corn makes any sense.

And for that matter, a diet such as ours, which is so water indulgent. Beef you see, according to waterfootprint.org, demands considerably more water to produce than any other food product. At 15,400 litre/kg (global average), its water footprint is 2.5 times that of pig, and almost four times that of chicken. And on a per gram of protein basis, it is six times higher than legumes. Packing away 57.4 pounds of beef per person a year, Americans are still on top of the world when it comes to beef eating.

Will we be able to sustain such a diet in an increasingly water-stressed planet? Most likely not. It's going to require some poking and prodding, but from farm to table, Americans will need to make adjustments in our food choices in order to sustain a healthy diet in a more heat-stressed and drought-prone world.

Steps to a Drought-Proof Diet

Change is not easy, but the simple steps suggested here promise multiple benefits not only to one's health and the health of the planet but to the pallet. Good food well grown tastes good -- it's that simple.

Shifting your daily intake away from the "least-efficient" proteins, like beef, to the "more-efficient" ones, like chicken, fish, or better still grains, legumes, nuts, etc., not only will be better for health but also will reduce pressure on the earth's land and water resources.

Fish is a smart protein alternative to meat. It's a lean protein with great health benefits. But according to the Natural Resources Defense Council (NRDC), “seafood can be contaminated with high amounts of mercury or PCBs, causing ill health effects. And some varieties of seafood have been overfished or caught in ways that may cause lasting damage to our oceans and marine life.”

So it's best to eat a variety of fish, favoring those that are wild, lower on the food chain, and sustainably harvested. (NRDC prepared this helpful seafood guide to make your shopping easy).

Proteins are also packed away in a wide variety of crop products. As my colleague and champion oarsman, Alice Henly, explains on NRDC's Smarter Living, some of the best protein-packed foods “are meat-free as well as fresh and delicious. Almost all vegetables, beans, grains, and nuts contain protein, making them a tasty, inexpensive and healthy source.” She provides recipes for 10 delicious meat-free meals and snacks.

Step 2. When You Do Eat Meat, Make It Grass-Fed

When you really want beef, the best choice is grass-fed, for all the reasons noted above and because, 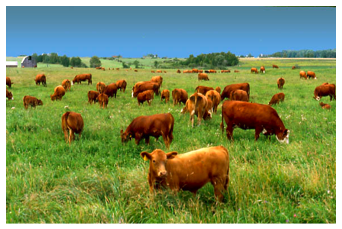 from a water resources point of view, grazing systems are preferable over industrial production systems, according to waterfootprint.org.

Grazing land is also more water resilient than land planted in corn or soy. As reported in OnEarth Magazine:

"A stretch of pure prairie will absorb five to seven inches of rain an hour," whereas, the "normal absorption on corn and soybean land ranges from 0.5 inch to 1.5 inches an hour."

This difference could avert disaster in times of too much rain as well as too little.

Trimming down to a sensible portion size is also a good idea. The USDA recommended serving size for meat or poultry is 2.5 oz. a day or “about the size of a deck of cards,” according to nutritionists Jennifer Nelson and Katherine Zeratsky for MayoClinic.com.

That's a good deal smaller than a quarter-pounder (4 oz.), which is itself less than the 5.4 oz. that the average American consumes in a day.

The drought is also going to drive up prices on corn- and soy-based packaged and processed foods, according to Mayo Clinic nutritionists Nelson and Zeratsky. Cutting back on heavily processed foods -- 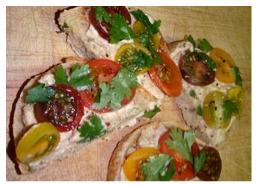 prepared meals, snack bars and chips -- will help you keep your food budget under control. As these foods often are higher in salt and sugars, reducing your intake is also better for your health.

With a well-stocked pantry and a fridge filled with healthy whole foods, sourced locally as much as possible, cooking from scratch ends up being the most affordable, resource-conscious way to good eating. And using the many recipes found here, it can be fast, easy and fun.

According to OnEarth, the U.S. Department of Agriculture (USDA) estimates that Americans waste 30 percent of all edible food produced, bought, and sold in this country. Tallying all the resources required in the process, the consequences of our wastefulness are staggering: 25 percent of all freshwater and 4 percent of all oil consumed in this country are used to produce food that is never eaten.

Reduce how much “take out” food you buy each week. Plan meals better and use leftovers creatively (turn them into lunch to take to work, in reusable containers, of course, a thermos if it's hot, a mini-cooler if it's cold).

Making just enough will mean much less food wasted at your home.